One of our big goals for our time in Eisenach (and for the trip more generally) was to hike. Eisenach borders on the Thüringer Wald (Thuringian Forest) area, which is renowned for its hiking.

We actually hiked to get up to the Wartburg, which I talked about in my previous post. It’s not a long hike, but it is fairly steep. We were definitely feeling our prairie legs afterwards. If you don’t want to hike, you also drive can drive or take the bus to the Wartburg, but once you see how terrifyingly steep the road is you might prefer the hike! The hike starts very close to the road up to the Wartburg and roughly parallels it.

Prior to the castle hike, we warmed up our legs with another, slightly easier one. This hike leads up to a memorial for the Burschenschaftler (the town website translates it as "Fraternity", but that's not a very good translation).
The Burschenschaftler were a student movement in the 19th century with nationalist, progressive, and anti-feudalistic leanings (keep in mind that at this time what is now Germany consisted of a multitude of small kingdoms). When I talked about the Wartburg being the birthplace of German unification in my previous post – this is the group of people who met there and brought about unification.

Neither the Nazis not the Communist regime particularly liked the group very much, and so they were disbanded for decades and the memorial allowed to fall into disrepair. It’s been mostly repaired – although when we were there, work was still being done – and the interior turned into a mini-museum. I found the museum interesting; however, most of what’s in there is in German so it’s probably not worth paying the few Euros admission if you don’t understand/read the language.

You do, however, get fantastic views over the town, the castle (the location was deliberately chosen!) and the surrounding area.
In the same region, there is a famous long-distance hike known as the Rennsteig (it’s from an old German word - I still don’t know what it means!). It’s fairly famous, and Germany's oldest distance hike, according to Lonely Planet. I’ve long been wanting to hike at least a segment or two thereof.

I also wanted to hike – and show Tristan – my favourite hike in Eisenach, the Drachenschlucht (Dragon’s Gorge). In a nice, convenient twist of fate, the latter hike connects to the former, and so a plan was born.

However, before we did that one, my grandparents wanted to give us a bit of an introduction to the Rennsteig. In the nearby village of Hörschel, there is a traditional German Gaststätte (sort of the German equivalent of a pub and guesthouse) called Tor zum Rennsteig (gateway to the Rennsteig - the website is also only in German), where they took us for lunch. I want to highlight two things about German cuisine: 1), it varies greatly from region to region, and 2) it’s traditionally very meat-heavy. Point 1 was my grandparents wanted to take us there; point 2 was why I (I am vegetarian, for those who don’t know) was a bit worried about what I’d eat. 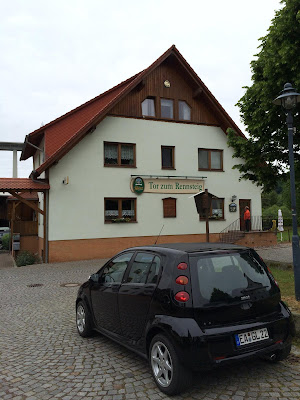 As it turned out, I could have saved myself the worry. I was blown away to realize that this traditional pub had, not one, but two vegetarian options. I had vegetarian “Schnitzel” (essentially a bunch vegetables stuck together with what I think was a slightly cheesy sauce, and breaded and fried) and some local beer. Considering that I like most vegetables and will eat almost anything if it’s covered in either cheese or breadcrumbs, I was over the moon. Tristan order pig’s heel – a traditional dish – and also loved it. 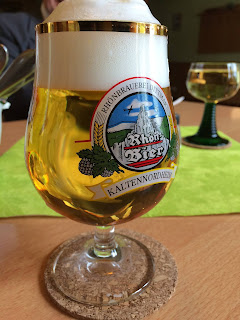 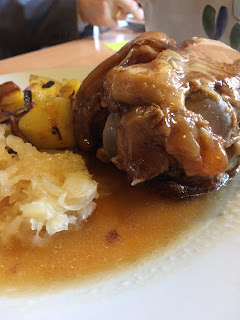 Which brings me to the hikes.

The Drachenschlucht hike takes you into and through the eponymous gorge. It’s very narrow and with steep walls, so for the much of the hike you actually walk on a kind of grating over the stream that formed the gorge, since there’s no space for an extra walkway! You see dark stone walls carved form millennia of water flowing through them on either side of you, narrow beams of sunlight coming from the top (and sometimes no sunlight!), miniature waterfalls, even narrower side gorges, and the forest beside and above you. This was one of the narrowest portions of the hike:

So you can see how high and narrow the canyon is! In this picture, the sunlight does penetrate into the gorge, but as you can see in the picture above sunlight can’t actually reach the bottom in all sections of the gorge. You can see where the stream carved out the gorge over millennia, including “pockets” in the wall where whirlpools would have carved the rock at one point in time. It’s a really cool hike and unlike any I’ve done elsewhere, and I’d recommended it highly if you’re in the area. It’s also not a difficult hike – it’s only 2.5 km and not very steep (we hiked uphill, you can also hike downhill to make life a bit easier). A map and more information can be found here. 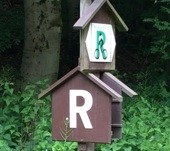 The Drachenschlucht hike ends (or begins, if you go the other way) at a small food stand and seating area. At this point, it also intersects with the Rennsteig. After a brief break, Tristan and I then turned and wandered on along the Rennsteig.

This hike mostly follows a ridgeline in the (low) mountains near Eisenach, making it in some ways the opposite of the Drachenschlucht. The segment we hiked was flat – a nice break after hiking uphill in the Drachenschlucht! – and led primarily through a light, airy forest. The day we picked to hike was a lovely sunny day and so for much of the hike we had the sunlight falling through the leaves and branches, forming sunbeams and dappled patterns on the forest floor. It was beautiful.

This neat little rest spot and watering spot (?) gives you a bit of an idea of what the hike looked like. 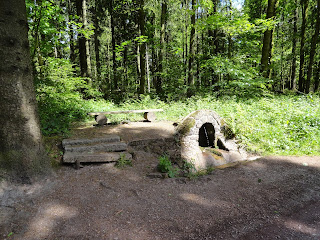 The best part? Ending up at a guesthouse, so we could restore our energy with ice cream and Kaffee und Kuchen (coffee and cake, a very important afternoon ritual in Germany!). 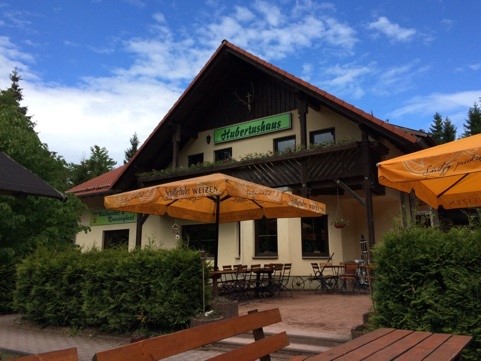