Tourist attractions and castles around Eisenach 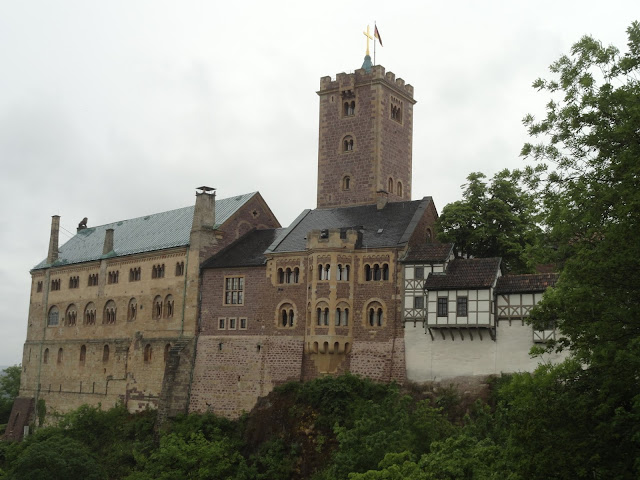 The biggest tourist attraction in Eisenach is the Wartburg, a medieval castle that sits above the town. Well, basically, it’s the main reason visitors from overseas come to Eisenach at all. The Wartburg is one of the best-preserved castles in Germany. It’s a UNESCO World Heritage Site partially for this reason, but mainly because it’s got enormous historical significance.

The castle is most famous for being where Martin Luther hid after being excommunicated from the Catholic church (his reformation being a bit unpopular with church leadership...). During this time, he translated the Bible into German, which not only made the Bible available to the common people for the first time ever, but also created the German language as it exists today.

This castle is considered the birthplace of German unification in the 19th century (prior to this time, Germany consisted of multiple smaller kingdoms). The first big meeting of the unification movement  - a student group/movement calling themselves the Burschenschaftler – was held at this castle.

On top of everything else, it is the setting of the legendary Sängerkrieg (which Wagner worked into his opera Tannhäuser, for those of you who are familiar with it), and the birthplace of Saint Elizabeth. The castle has certainly had a history!

Here’s a closeup of the drawbridge, which we thought was super cool. The “moat” (no water in it) goes quite deep into solid rock…I for one would not have wanted to risk falling down there, so I imagine it was still a good defense. 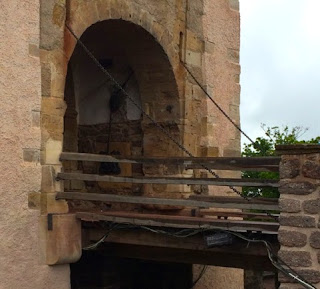 The drawbridge is now attached on both sides and stays open permanently, but the opening and closing mechanism is still present.
Here’s a look at the outside wall (the white section you see in the first picture), with arrow slits and a cannon. The arrow slits (and cannon spots) get narrower towards the outside of the wall - this would allow an archer to shoot at attackers from any number of angles while making it extremely difficult to fire in. 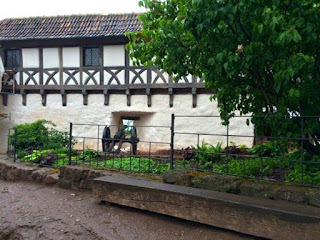 And, here's the dragon I promised in my last post! He hangs over a well in the first courtyard, near the gift shop.
The second castle courtyard is much bigger and well worth seeing. Highlight is the Medieval garden, shown below; you can't go in, but it's small enough that you can see the entirety from the outside.
This is the newest castle building, dating from the 19th century. The architectural style is quite different, and there’s an actual bath in there!
The aforementioned bath (best picture we got, unfortunately).
This courtyard also has a really cool square tower. It costs a bit to climb, but gives you nice views (and lets you feel cool because you're in a castle tower...or maybe that's just me?).

We decided to take a tour of the castle (you can’t see most of the interior without one). The tour talked about the history, of course, but also generally about what life would have been like in the castle in various eras. Tristan and I, being fantasy nerds, really liked that aspect :D.


Highlights of the tour are the mosaic room (no pictures allowed, but you can find some here, here, and here), which details the life of Saint Elizabeth and the room where Martin Luther sat and translated the Bible. Whether you're religious or not, seeing that is very neat.
All the furniture is not original except for the whale vertebra (the big block on the floor by the desk). Where the wall is damaged - legend has it the devil swung by while Luther was doing his work, and Luther threw his inkpot at him. Supposedly you could see the ink splatter on the wall, so people would come and hew off bits of it as keepsakes (or possibly for religious purposes?), which is why that section of the wall is so damaged.

There is one English tour per day during the high season; all other tours are in German, but you can pick up an info sheet in the language of your preference and try to follow along with the German tour. (During our tour, I compared Tristan’s English sheet with what the guide was saying. It was almost exactly the same information, but in a different order, which was a bit confusing). More information (although no tour information) can be found here. Tickets can be purchased in the gift shop, where they'll also give you the info sheets if you want.

In my previous post, I hinted that someone famous was born in Eisenach…namely the composer Bach. As you can probably imagine, the house he was born in is another popular tourist attraction. (Historians now believe the house was across the street from the museum and no longer exists, but close enough).
The museum is partially inside this house, which dates from Bach’s time and has been carefully preserved and restored, and partially inside a more modern building. My favourite part of this museum is the enormous collection of period instruments, including things like a harpsichord and a house organ (people used to have little organs inside their houses, can you imagine?).
The museum is open daily (check times on their website to be sure); adult admission is 9€, student is 5€.

A third big tourist attraction is the Lutherhaus, where Martin Luther was born. However, it was closed for renovations while we were there, and will remain so until 2017 (that year being the 400th anniversary of the Reformation). I had a picture of it in my previous post.

You didn't think we were done with castles after only one, did you? My grandparents kindly took us to the nearby town of Creuzburg to visit the castle that gives the town its name. The name means "Cross castle" - this is not religious, but stems from the castle's location on (what used to be, centuries ago) an important crossroads.

Admission is free - you just wander in and poke around. There is a small hotel located in one of the old castle buildings. Another one contains a potter's workshop (he was sadly not in when we were there), and a third one has a small museum.

This is another very well-preserved castle and we had a lovely hour looking around. There’s no drawbridge here, just a very steep road up to the castle gate.
There's a formal garden inside the castle grounds, which you can see in the picture below. If you look closely at the wall, there are things poking out - these would have held up the walkway where the guards could patrol and defend the castle (see above comment on being a fantasy nerd!) 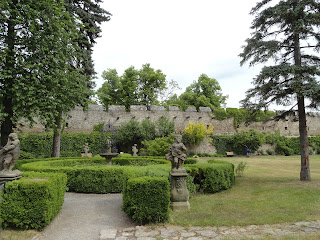 Below are two of the castle's buildings. 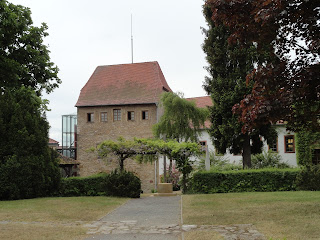 Possibly my favourite part of the castle is this enormous and beautiful tree. It's in the middle of the castle courtyard and towers over everything. According to the sign, it’s around 500 years old. So cool! The bottom picture shows me in front of the trunk, for scale. 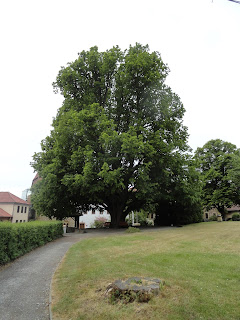 The old well is still present in the castle courtyard, close to the tree. It's got a grating over it so you can't fall in! However, you can look in - it's mind-bogglingly deep, especially when you consider that it was hewn into solid rock...and with Medieval technology.

We finished up our visit with a stroll around the castle (there is a bit of a garden behind and beside the castle with a path through). The path was a bit overgrown and look untended when we went, but this sort of added to the atmosphere :).
That's all for this post! I hope you've enjoyed my recaps so far. Next post I'll be talking about the hikes we did and wrapping up a few loose ends of our time in Eisenach, and then onwards!
Posted by Sophia at 17:24