To me, going to Eisenach is coming home. To Tristan, it was his first time going anywhere he (mostly) didn’t speak the language. I was, at the time, so focused on seeing my grandparents (and a bed) again that I didn’t think much of it, but in hindsight I imagine the poor guy was feeling pretty culture-shocked and overwhelmed. Of course, we were both exhausted from our nearly-30-hour flight as well. 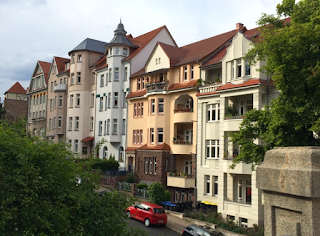 Our time in Eisenach started off with a bit of a hitch: my bag didn’t make it onto our last flight. This wasn’t too big of an issue, as it arrived the next day – except for the fact that it was now the weekend, and so the courier service wasn’t running (Germans take their weekend VERY seriously, believe me!). Since I was at my grandparents’ and they provided me with PJs, toiletries, and the like, it wasn’t too big of an issue (I wasn’t too happy about wearing the clothes I’d worn on the plane for 4 days straight, but oh well). The only real problem was that when we arrived the country was just coming off a weird cold spell (it was single digit temperatures – Celsius that is – for our first few days there! In Germany, in May!) and my jacket was in my checked luggage. This necessitated some fashionable improvising:

We started our time in Eisenach off by taking it easy. The intent of our time in Eisenach was largely to do that and spend time with my grandparents. As I mentioned in my previous post, I don't see them often (it had been over 3 years since the last time at this point). Plus, with my grandmother’s amazing home cooking, this wasn’t exactly a hardship for either of us.

Once we'd recovered a bit, the next step was to begin exploring the town. Eisenach is a curious mix of really photogenic and fairly...non-photogenic. It was bombed during WWII, so a bunch of the old buildings are missing, and it has a lot of new, not-so-lovely buildings especially at the edge of town. However, much of the old town centre as well as the Villenviertel (villa quarter) remain intact, so there's plenty to admire and photograph.

Have I convinced you yet? No?


This is a historic garden (now a public park). We were lucky enough to catch the monthly flea market there on our second day. We had lots of fun going through the sale items, and picked up some gifts there too :). 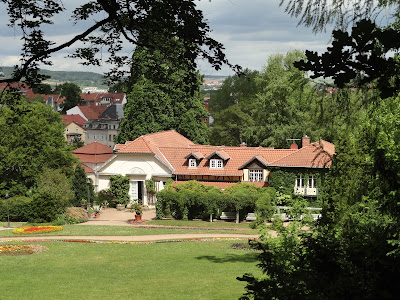 Obviously, no visit to a European city would be complete without visiting some churches, and Eisenach delivers on that count.

This one is the Georgenkirche (St. George’s church), as in the guy who killed the dragon. 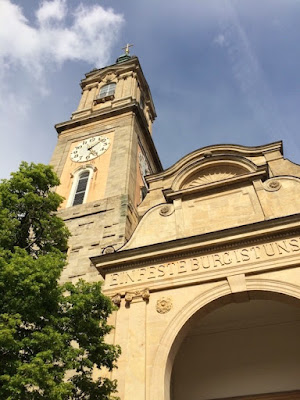 He's the patron saint of the town so there are dragon statues all over. I didn't get one of the statue by this church, but there will be one in my next post, promise!

It’s actually fairly plain on the inside for European standards. 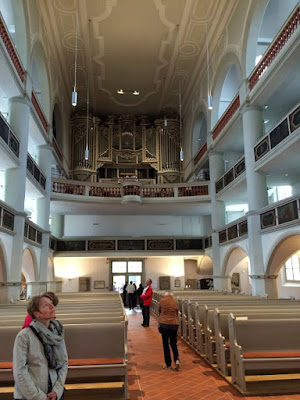 But, well, for European standards… 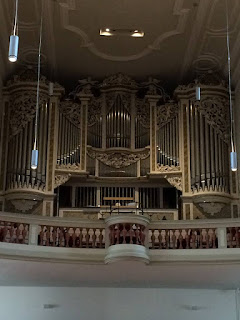 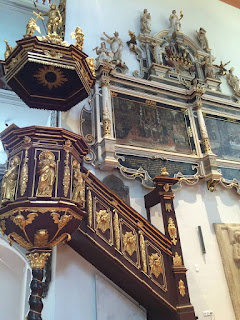 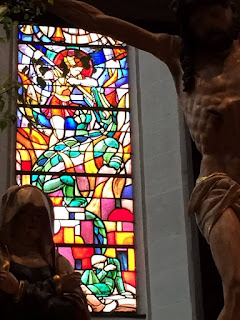 The church is partially famous for being the church that Bach was baptized in. A statue of him stands in the entranceway. 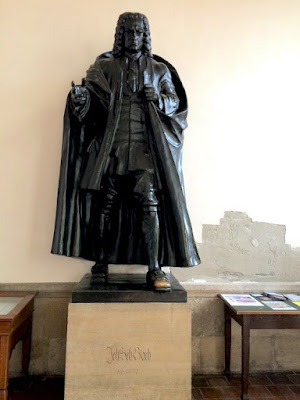 You know who else was baptized in this church? Me! I was super excited to find out I’d been baptized in the same church as Bach! Later on in our stay here, we were lucky enough to come back to this church for an organ concert - not something you'd normally get to do in Canada, so that was a treat.

This is the Nikolaikirche (St. Nicholas’s church). It was built in the 1180, and is attached to an old city gate and the last remaining piece of the medieval city wall. (those little arches you can see in the centre of the picture, next to the church tower). Unfortunately it was being renovated when we visited and we couldn’t go in, but still really cool to see. 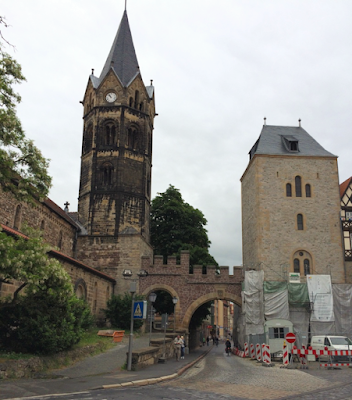 We also found this little chapel (unfortunately also closed). When it was built, this chapel was located outside of the city walls. It was meant to serve and care for those people who were not desired in the city walls. At the time, this meant especially plague victims. We found the chapel really cute and thought its history was really neat. 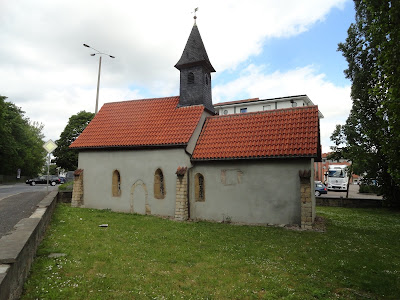 I'll be writing up the remainder of our time in Eisenach in the next several posts. Expect lots of castles!
Posted by Sophia at 09:48