From Erfurt we went on to the Sächsiche Schweiz (Saxon Switzerland), a nature region and national park to the far east of Germany, near Dresden (it continues on over the Czech border as well, as the Bohemian Switzerland). The area is known for its sheer sandstone cliffs, which makes it very popular with climbers. It’s also really picturesque, and has excellent hiking, so it attracts all kinds of tourism.
When we were planning this trip, this one of the first spots that came up, due to Tristan having seen a single picture of the region and deciding he had to go there.

Specifically, the picture he saw was of the Bastei Bridge:
The bridge is on a multi-day hiking trail aptly named Malerweg (Painter’s trail). The trail (purportedly) follows the footsteps of the 19th-century German Romantic painters, many of whom painted (and made prints) in and of the surrounding region.
Our goal was to spend two nights on the trail, hiking from town to town before heading on to Prague. We decided to start with stage 2 (according to the tourism website for the region), which leads from Stadt Wehlen on the river up to the village of Hohnstein, passing over the Bastei bridge and by the spa town of Rathen.

Both of those plans fell through quickly. It was horribly hot and sunny (30°C! Pretty ridiculous for Germany), and our backpacks were heavy and mine, at least, was hurting me pretty quickly. I figured out (much) later that even though we’d packed lightly for travel, we didn’t pack sufficiently lightly for backpacking/trekking, which is a whole ‘nother ballgame. Add in a lack of training, a too-late start, that fact that I should have gotten my bag fitted (as I tell others to do…oops…), etc. Ah well, live and learn.

We did hike to Bastei (a further problem – we probably spent too much time there wandering around and taking pictures!). This is where you’ll encounter crowds and foreign tourists, but the views are still worth it. 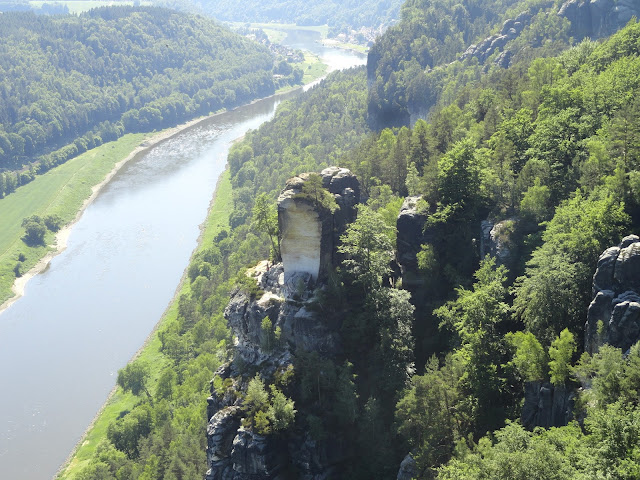 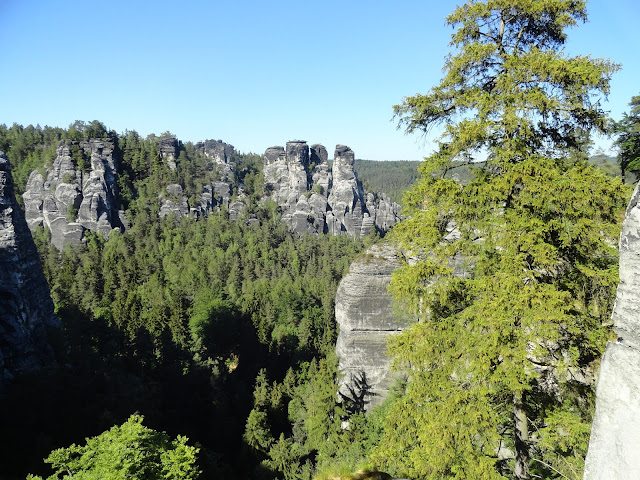 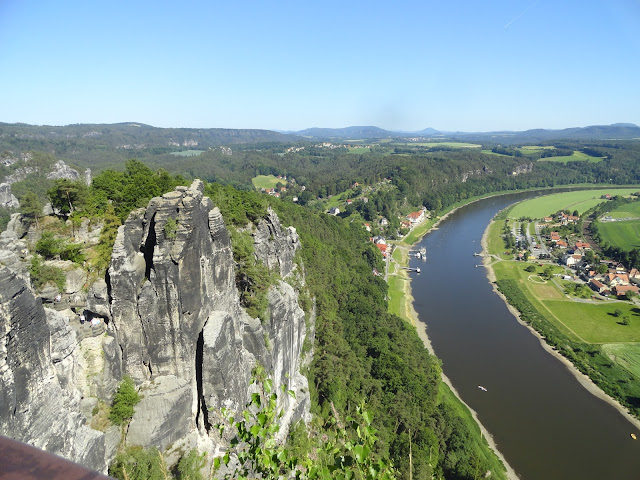 Bastei comes from an old word for fortification (similar to “bastion” or the French “bastille”), as there was one near one end of the bridge (pretty well gone now, although you can take a look at what’s left for a small fee). The bridge itself was built in the 19th century to encourage tourism; it's long been popular with tourists (and at least two of the aforementioned Romantic painters).
From Bastei we hiked down to Rathen with the intent of calling it a day. Having already booked our campsite, we hoped to catch a bus up to Hohnstein. Well, it was Friday evening, so no more busses (assuming there were busses to/from Rathen in the first place, which I'm still fuzzy on). Well, was there a campground around? No campground here, said the souvenir stand guy with an apologetic expression. A hostel then? No such thing either (Rathen is a spa town, so it's aimed at those who want comfort and are happy to pay for it...which is to say, not a pair of dirtbag backpackers. Hikers generally skirt it and head on to Hohnstein).

The guy finally pointed us to a private bus company that generally ferries tourists to and from Bastei but can occasionally be convinced to take hikers up to Hohnstein. Since it was near the end of the workday, the driver agreed to take us to our campground (link in German only) - for a fairly hefty price (admittedly not unfair for that town, just more than we'd hoped).

the website for the hike gave the impression that one could arrange luggage transfer between the different accommodation locations, but we asked around and found nothing of the sort. Our hosts at the campground told us that it was (to the best of their knowledge) only done by hiking tour companies, and only as part of such a tour. If you do intend to do the hike independently, try contacting your accommodation(s) and see if they can help you with luggage; otherwise your best bet is to try and leave your luggage somewhere, either in your first accommodation (or in Dresden), or in a train station, which may or may or may not have sufficiently long storage.

A knowledge of German will come in handy in this region. It’s out in the country, where you’ll often find less English knowledge (and thicker German accents, which may challenge your German comprehension!), and few foreign tourists come here outside of Bastei. That said, anyone who works in tourism will be able to communicate with you.

Campgrounds aren’t generally located in the towns, and not always along the trail; they’re aimed at people driving in for the weekend – or the week – staying there, and doing day hikes around the region (a la National Prak campgrounds in North America). Your best bet is to hike like the Germans do, from one hotel/hostel/guesthouse to the next.

The high season starts around May. I recommend going during the week – you’ll find fewer crowds and better bus service.

Next post I'll be talking about some further mishaps we had, as well as some successful adventures in the region. Expect lots more beautiful landscapes and old buildings!
Posted by Sophia at 20:25