A Quiet Day on the Walensee

A glimpse of the Walensee (Lake Walen) out of a train window, brilliant turquoise water against a backdrop of sheer mountains seemingly plunging straight into the lake, was what started the weekend plan. I had first seen the lake, one of Switzerland’s deepest and largest, while on the way to Chur; when Michael and I decided to plan a hiking weekend together, it was one of the destinations I suggested and the one that we quickly agreed on. 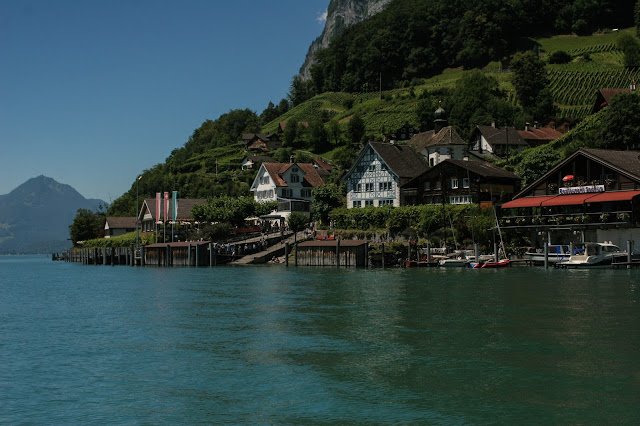 After hiking the 5-Seenwanderung, Michael and I stayed overnight in a hut up on the mountain. There, the friendly hut warden asked us if we intended to hike again, and we told him that we'd planned to spend a quiet day at the Walensee instead.

"There aren't many beaches on the lake", he warned us, correctly surmising our main plan for the day. He claimed the only beach worth being called that is in Walenstadt, at the lake's easternmost point.

After a (delicious) breakfast and gondola ride down, we followed his suggestion.

The beach in Walenstadt did not disappoint. Long, it wrapped around much of the lake's eastern end, with expansive views over the lake itself and of the Churfirsten rising abruptly to one side.
The beach itself, though not wide, was backed by a grassy public park, so there was ample for everyone to sit and sunbathe to their heart's content. The mandatory food stands were there, as was - unusually for Switzerland - a facility with public change and bathrooms.
Michael and I found a spot to sit. He promptly started reading, and I, being me, wandered off to take pictures before settling into my own book. 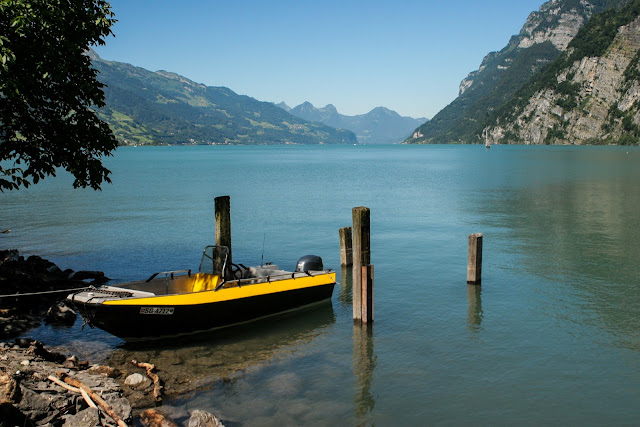 I did try for a quick swim, but the water was bitterly cold (it is one of the deepest lakes in Switzerland!) and so even this Canadian didn't last very long.
The Walensee is quite interesting; despite being freezing cold itself, it creates a nearly tropical climate around itself, to the point where tropical fruits such as kiwis grow around the lake (yes, really!). It's also a wine-growing region, particularly on the sheer northern side of the lake.
After lunch, it was time for a slight change of pace. We packed up and drove on to Murg, halfway around the lake. From there we hopped on a ferry to take us straight across the lake, to the tiny, car-free village of Quinten.

On the hot, sunny day we had, the ride across the lake in the boat was highly enjoyable. We sat outside in the front of the boat, and so we had views to both sides and could watch the far shore get closer.

This also meant we had first views of Quinten and its even tinier sister village of Au, each a handful of red-roofed houses and vibrant green vineyards clinging to the steep mountain side.
I'd never been to a car-free village before and was eager to see what one looked like. Unlike car-free towns like Zermatt, which I'd visit later on in my time in Switzerland, Quinten has nothing that even distantly resembles roads, only dirt paths and stone stairs. Once you leave the two modern restaurants and the majority of the tourist crowds behind you (all clustered by the waterfront, for obvious reasons), it's easy to feel as though you've stepped back in time.
This feeling was heightened when we  stumbled into a tiny, wood-panelled basement store selling local wine and jams.

It didn't take us long to wander through the entirety of the village. As the entire population of Quinten is 41 (and I believe this number actually includes Au) and the number of buildings is around that number too, we weren't terribly surprised.
For all the the village is tiny, we found three separate stores selling wine. Two - including the aforementioned basement store - sold wine and a bit in the way of jams, and the third was a larger souvenir store selling mostly locally made handicrafts. We spent a bit of time in this third store, browsing the wine (Michael) and crafts (me), and came back briefly before leaving the village to pick up some wine bottles. 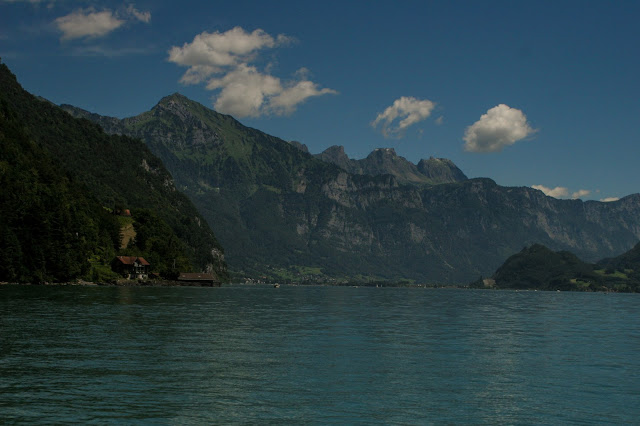 One we'd exhausted all other activities we decided it was time to sit by the water and drink some local wine. I'm more partial to reds but quite enjoyed the white I drank there, surrounded by palm trees and overlooking the Walensee.
Since we had time before the next ferry, we strolled along the lakeshore path to Au. Au is so tiny that by the time you realize you've waked into the village you're almost through again...

There didn't seem to be much of anything in Au, but we enjoyed the walk along the lakeside trail to get there and back. The trail, which wends along the entire north side of the lake from Weesen in the west to Walenstadt in the east, is one of the most popular activities along the lake. After our long hike the day before, we were both in agreement that we didn't want to do any hikes, but I enjoyed at least seeing a little bit of the trail.
Then, having gotten our fill of sun and relaxation, we went back home.

Thanks to Michael for companionship, planning help, and doing all the driving! 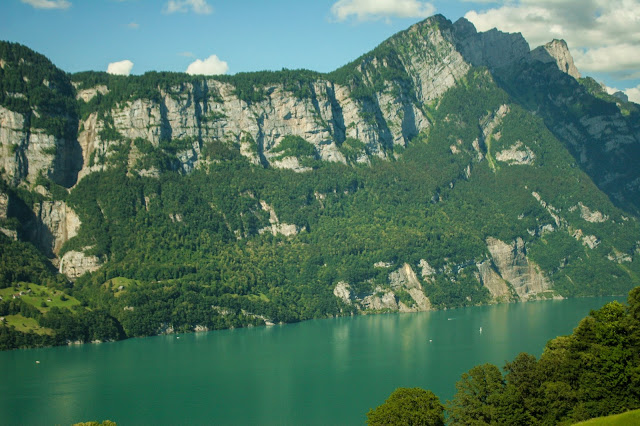