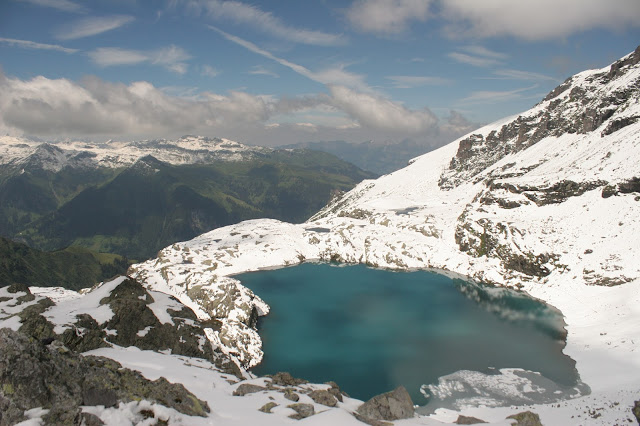 It started when I sent my my friend Michael (yes, the same one who was my host and guide in Baden) pictures of the hike I did at the Sardona Tectonic Area. In response, he expressed his envy and admiration, saying “how do you guys find all these amazing places to hike in?!”

I explained, adding drily that it's not exactly difficult to find beautiful spots in Switzerland, and offered to let him know what I was planning next time I went hiking.

Deciding on beautiful places is hard (why is no one crying for me? I don't understand...). Out of the list of places I had in mind for the next hiking weekend, we eventually settled on the Walensee, one of Switzerland's largest lakes and off the radar of most foreign visitors.

Michael suggested we spend one day at the lake and one day hiking the 5-Seenwanderung (5 Lakes Hike), likely one of the best-known trails in Switzerland. Apparently we think alike, as a few days later I would realize that I'd had the exact same hike open on my web browser!

It rained in the days leading up to the hike, but Saturday morning dawned clear and sunny, and the two of us and Dominik (another former guesthouse resident) set off in high spirits.
Dominik had kindly hosted me before and after the Jungfraujoch trip, when I had to take a very early train and came back late (many thanks, Dominik!). We swapped stories about our respective solo hiking adventures (he would later take his visiting family to Flims, on my recommendation) and promised to keep each other appraised of upcoming hiking plans. 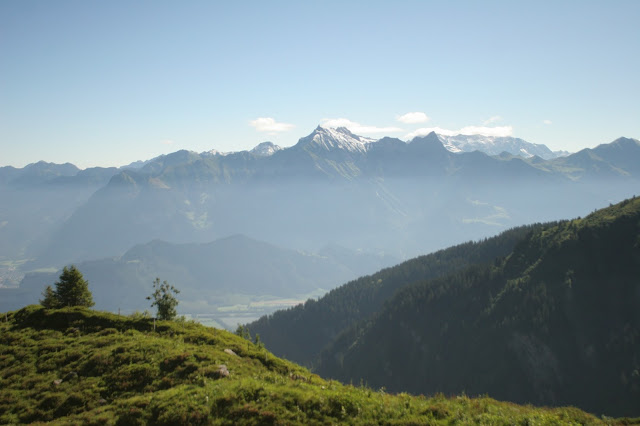 Of course, the aforementioned rain fell as snow and not as rain at elevation, and the trail carried a snow warning the morning we left (but was not closed, as it would be if there was a serious risk of avalanches or similar disasters). After some deliberation, we decided to chance the trail anyways. 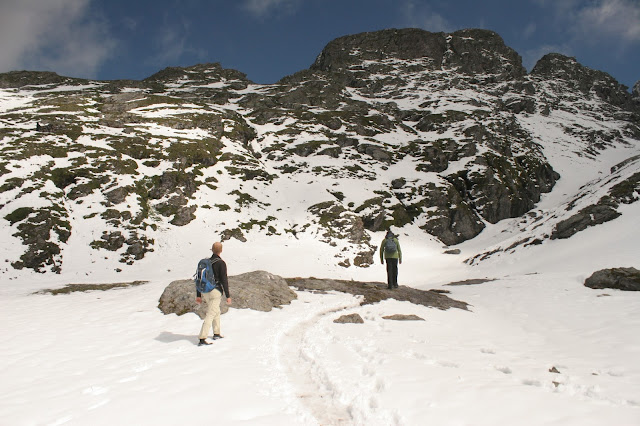 We were surprised, too, by how cold it was at elevation (barely above freezing), and all took a moment to put on more layers.
The hike started of with a fairly steep trek up a snow-covered incline. This was hard. I’m not good hiking up anyways (I blame my prairie legs and lungs!), and in the snow I felt as though I was sliding back half a step for every step forward. I was coming off a cold, which didn't help my ability to breathe. On top of that, Dominik, who is both quite tall and extremely fit, set what Michael and I would henceforth always refer to as a “Dominik pace”. (In his defense, the lady at the gondola had warned us to hurry if he wanted to make the last gondola!).  I found myself gasping and sucking air the entire way up, not a lot of fun.
Then we got to the top. The vista that opened before us was stunning, made even more so by the snow that had so hampered us moments before.

To our amazement, the lake up there, Wildsee, was frozen over.
The descent that followed was easier for me and harder for Michael than the ascent had been. The snow made the descent significantly trickier as well; all three of us took a turn slipping and falling on our butts. 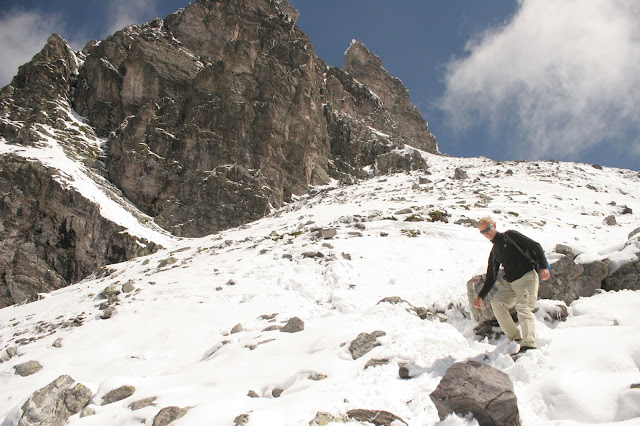 The views became better with every step we took downhill, as first a mountain panorama and then glimpses of the second lake opened before us.
The second lake (Schottensee) was easily the most breathtaking, all brilliant turquoise and perfectly smooth and reflective. 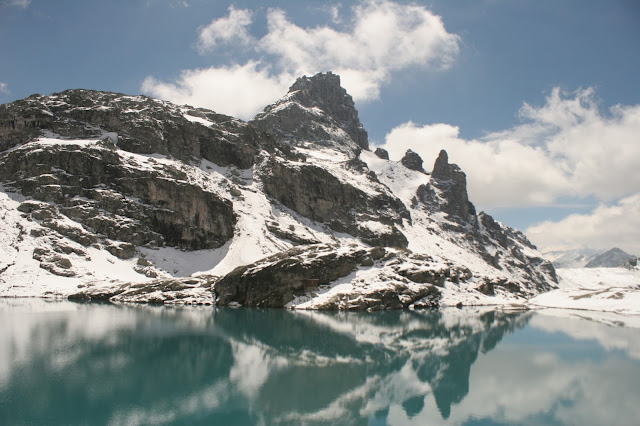 From there, a second ascent, less high and steep than the previous one, and then down to the next lake, aptly named Schwarzsee (Black Lake). 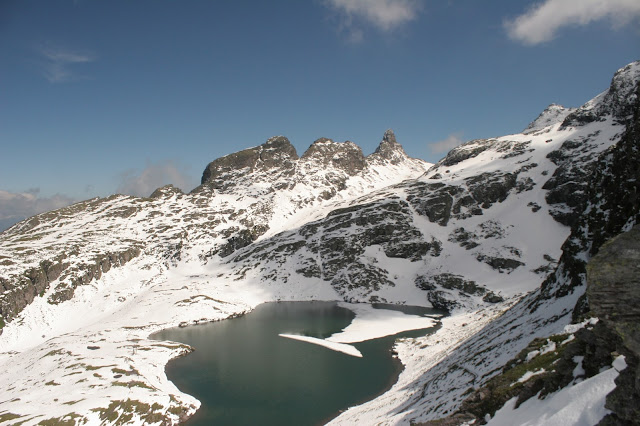 Snow on mountains, particularly on a sunny day, means risk of avalanches. Knowing this, I had spent most of the hike keeping an eye on the snow-covered slopes above us, and had caught Dominik doing the same (there is a comfort to realizing that your far more experienced companion is thinking and doing the exact same thing you are!).

We had just passed the lake and started the next uphill section when we heard a deafening crack behind us. We spun around to see an avalanche falling…right above the descent we’d just hiked. It didn’t hit the trail, but was still frighteningly close, and a good reminder of the danger of mountains and of snow. 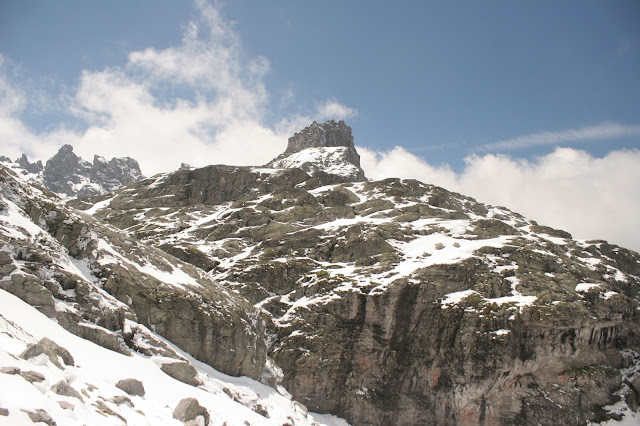 We were quite pleased to get to this point. All of those are stone towers, dozens upon dozens of them. 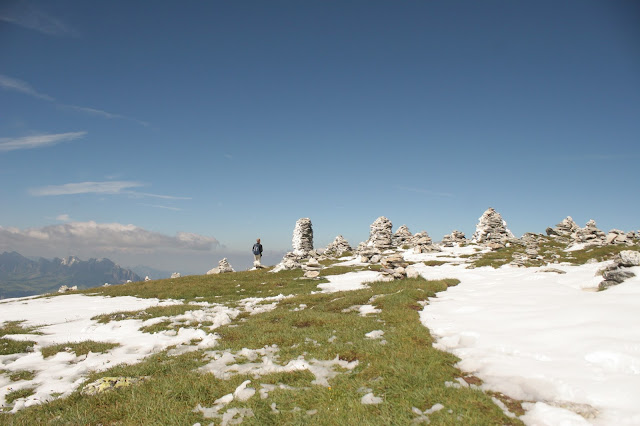 Some were built to impressive heights!
Here, we lost the trail briefly, and the maps we had (low-quality tourist maps, not the topo maps I usually took hiking) were not clear. We, being three Germans (as I'd later say to Michael), did the logical thing, splitting up to search in three different directions. We found the trail again within a few minutes.

The trail curved around towards the valley the town was in, past this rock outcrop where I tried to and didn't completely succeed in taking a Trolltunga-esque picture, and a slightly terrifying snow cornice that the trail thankfully gave a wide berth.
It was getting late at this point and Dominik considered running ahead to make the last gondola. I looked at my watch and expressed my doubts that he was going to make it, no matter how fast he went. The trail segment we were on was steep and exposed, and running on it would have been very dangerous; even if the trail were to become runnable soon, I felt that he wasn’t going to make the gondola.
After a moment of thought, Dominik asked, “Do you think they have beer at that hut you guys are going to?”
I replied, “I’d assume so; they usually do.”
Dominik said, “Ok, I’ll join you guys for a beer and then hike down!”

That's how you know you chose good hiking companions.
I won’t claim that Michael and I were not relieved when we made it to a hut not too long after. We were both quite tired from the hike, and my boots were soaked (they’re waterproof, but I’d had a lot of snow fall in…in hindsight, tights were not a good choice for hiking in snow…). We felt that we'd definitely earned our beers!
I love my solo hiking, but after two weekends alone I enjoyed having hiking companions again. (Michael, polite as he is, half-apologized to me at one point and said he hoped having the two guys along wasn’t ruining my hiking experience, but this could not have been further from the truth!) The two guys are a lot of fun, and spending time with them is a pleasure.

Our day of hiking was full of conversation, jokes, goofiness, and laughter. From Dominik telling us we'd gone the wrong way because we were hiking away from the sun and towards cloudy skies (he dropped this little comment most of the way up one of the inclines, and I could have cheerfully strangled him in that moment) to our "photo duel", which Micheal, who was caught in the middle, found somewhat less funny than the rest of us did, it was far more fun to have companionship for the trail than soloing it would have been.