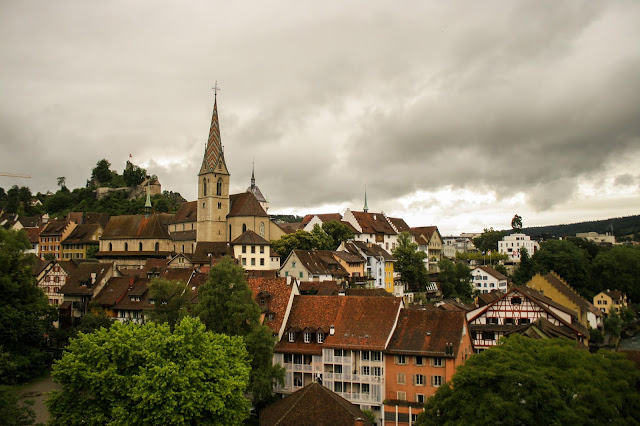 I've already posted pictures of Brugg, the next larger town from PSI. Baden is one train stop further from Brugg, and somewhat bigger.

The town of Baden would most likely not have appeared on my radar at all had not Michael, one of my closest friends from the guesthouse (where I was living while in Switzerland), moved there about a month after I came to the country. 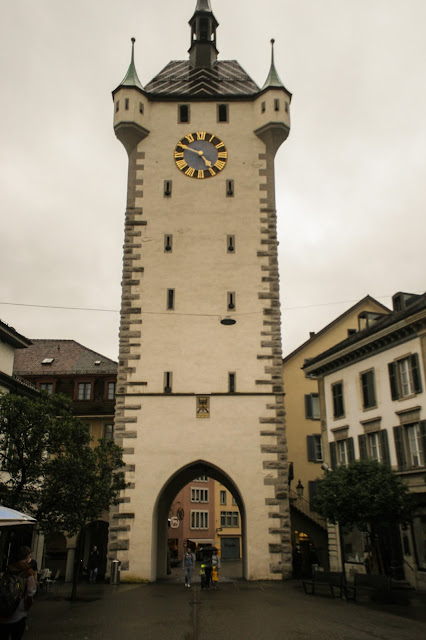 That would have been a loss! Baden is a remarkably beautiful town, and with quite a number of things to see and do. 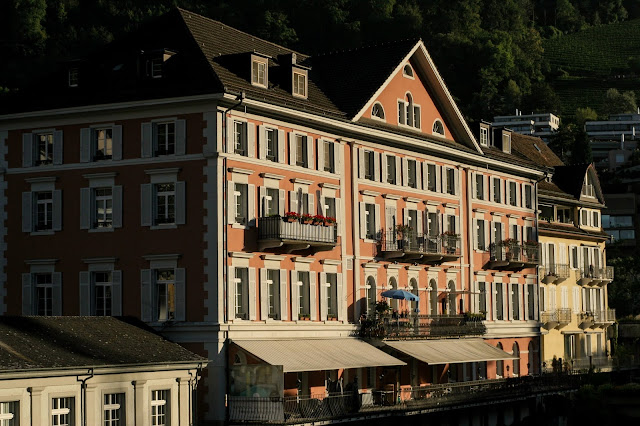 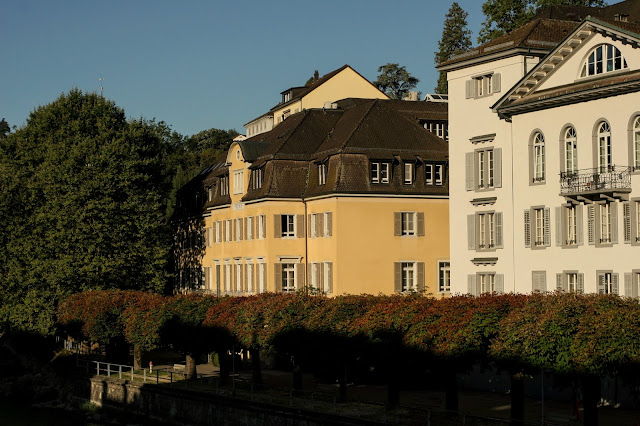 As it is, I found myself there on multiple occasions. Twice, I went with a group of my housemates to watch Euro Cup matches (including the heartbreaking game where Germany got eliminated, unfortunately). On one of these occasions, I went early and Michael kindly took me on a tour of Baden's sights.

First stop: the castle ruins. There isn't too much to see of the castle itself, but as it's located on a hill surrounded by the town, you get nice views.
From the castle we went to walk around the old town. It's nice and compact, and beautifully preserved, well worth a visit. 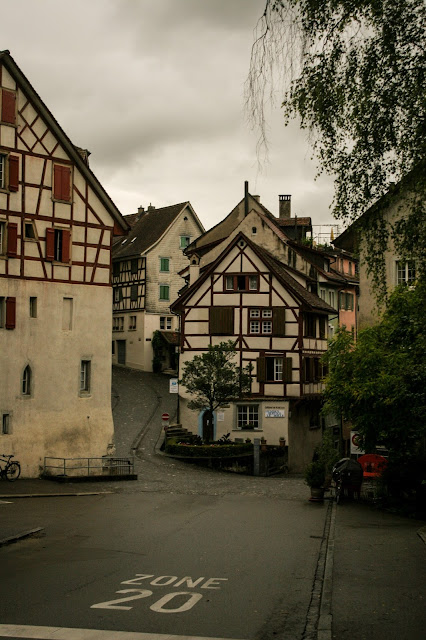 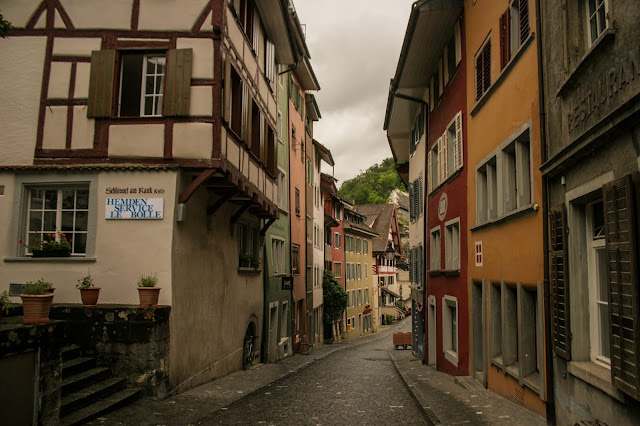 Aaaand...the old town has lots of material for photographers! 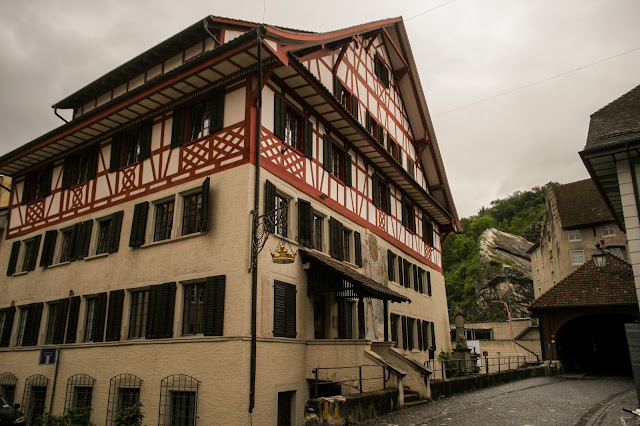 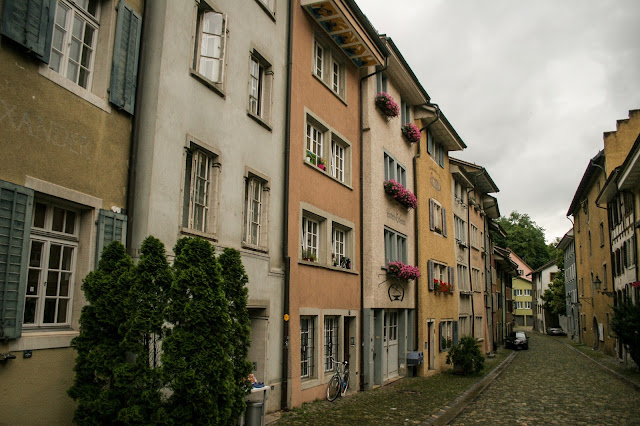 One very cool aspect of the old town Michael pointed out to me: many of the houses have original signs on them that name or mark the house. 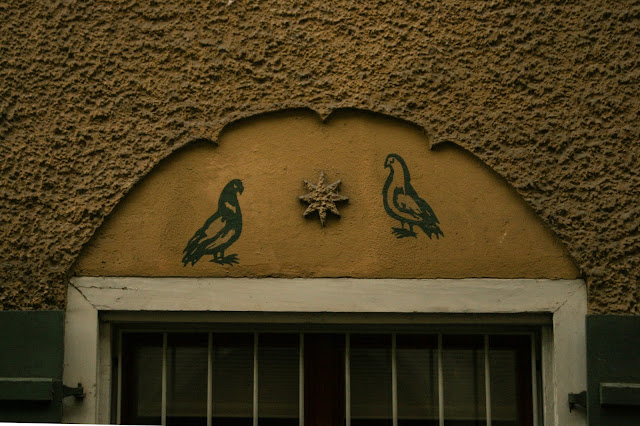 Several bars in Baden were hosting public viewings of the Euro Cup. Michael had planned for us to go to Werkk, a bar/concert/art venue in a renovated metal shop, but found out at the last minute that the venue was closed for this particular game.

This resulted in the fairly funny situation of approximately ten of us clustered in his living room to watch the game...just days after he had moved in. His housemates came home to a bit of a surprise! ("You're getting a taste of guesthouse life," he told them, and thankfully they were great sports over us taking over their place). 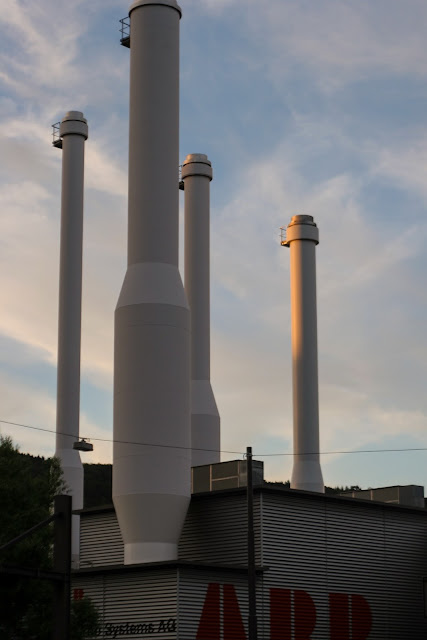 We did make it out to Werkk for a later game, a cool location and the public viewing a cool atmosphere.
In lieu of heading home after the ThinkSwiss meeting, as I'd planned, I went back to Baden, to a different bar/concert venue. 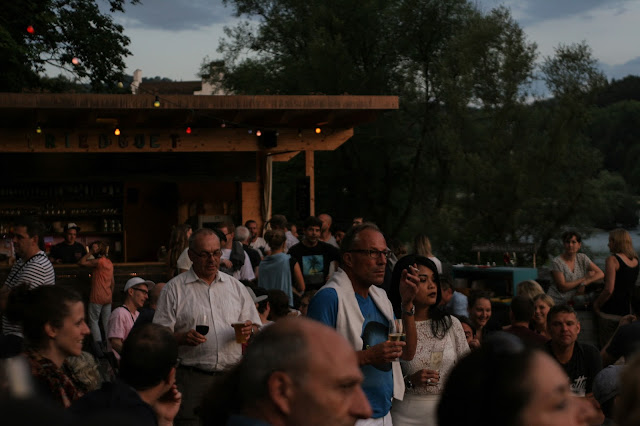 The bar, Triebguet, is wonderful: a simple, open-air place on the river, right by the wooden bridge and across from the old town. It's a student-run bar, so the prices are very reasonable - for Switzerland, anyways - and there's a barbecue to grill your own food, if you choose.
The concert was an English-language blues band, which made for a highly amusing juxtaposition with the Swiss German and medieval buildings surrounding us. The music, the bar itself, and watching and quietly conversing with Michael proved to be a perfect antidote to my exhaustion from the intense weekend trip.
We tried to go back to Triebguet for another concert some weeks later, only to realize (once I'd already gotten to Baden) that the concert was in two days...oops! Instead we drank Bavarian beer at Michael's place and then walked up one of the hills on the edge of town to try and catch the Perseid meteor shower.
We saw exactly two shooting stars (apparently others saw hundreds in a similar period of time!) but did get to admire a beautiful starry sky, and befriended a cuddly cat who ended up following us part of the way back. 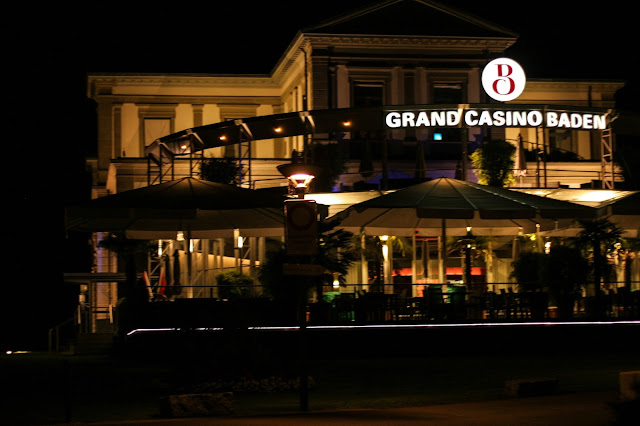 I stayed at Michael's multiple times, so many thanks to him and his housemates for being kind and gracious hosts!
They were also nice enough to my stuff while I went traipsing around the country at the end of my time in Switzerland.

When native German speakers hear me speaking German, they tend to either assume I'm from Germany, or, if they know I'm from Canada, ask me full of amazement how I learned to speak German so well. 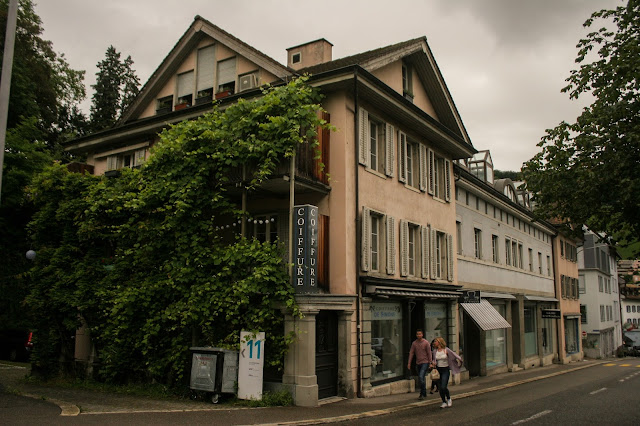 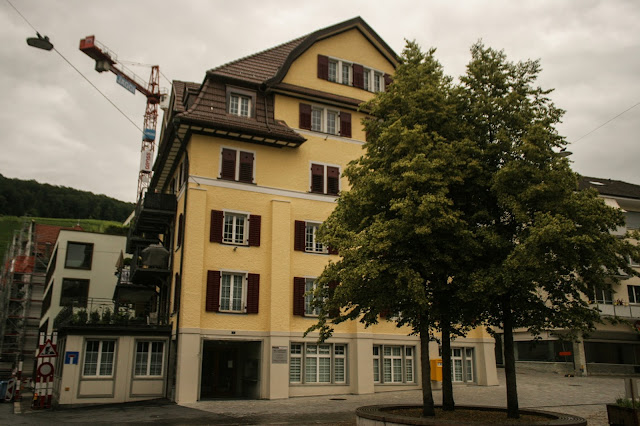 Michael and I were talking in German when his housemate walked in and joined our conversation. He turned to me and asked, "where did you learn to speak English so well?"
Michael and I started laughing and it took a moment before I was able to explain to the poor guy.
After finding out I was from Canada, he was quite eager to tell me about the student exchange year he'd spent in California. 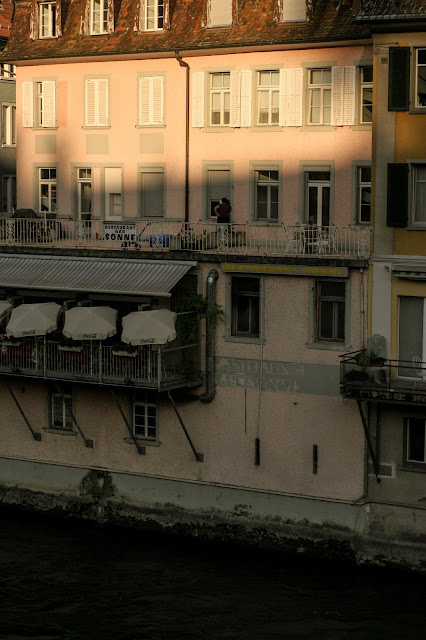 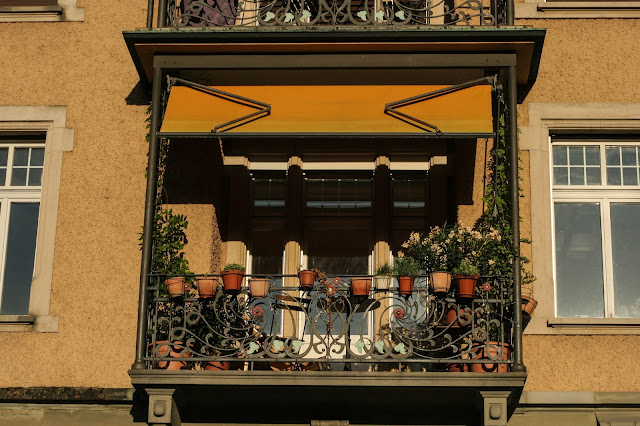 Baden is well-known for its hot springs - even the Romans used them! These springs feed into the baths that give the town its name ("Baden" literally means "to bathe" in German). Many of these baths are in expensive hotels near the river, but there is a bench that's public and free, where you can dip your feet in the hot water.
I didn't have the chance to experience any of the hot springs, but that's alright. Thinking of Baden brings many beautiful memories, and so I have no regrets. 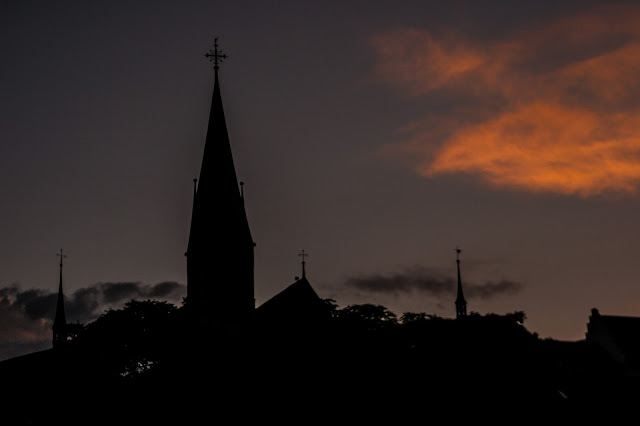