I’m writing this post after the US election, one that ended differently than I and many people had hoped, the victory of a campaign based on hatred and fear, on bigotry and bullying. I've been battling shock, horror, and despair; in the midst of that, I decided to write something slightly different from what I normally post here.

I wanted to spread some positivity – not in the shallow self-help/new age sense of the word, but in the sense that I wanted to remind myself and others that humans are fundamentally good, and that we have a deep capacity for kindness, for helping others, for coming together across our differences. To this end, I’ve decided to write about acts of kindness I’ve been on the receiving end of. All of these acts were performed by strangers; all were unexpected – in no case had I met the people before, let alone done something for them – and while all were unexpected none were "random" in the sense of finding out that someone in front of me had paid for my coffee. Some acts were bigger than others, but all touched me enormously when they occurred and have stuck with me since.

New Mexico, late 1990s, sometime in spring
My family has just pulled into a small pueblo, somewhere in northern New Mexico. Economically speaking it’s not bad, as far as reservations go, but still evidently far poorer than the fairly affluent small town we’ve come from. We get out of the car and begin walking, looking for whatever it is we have come for. A man – tall, broad-shouldered, Aboriginal, the kind many of us would give a wide berth on Winnipeg’s streets – steps out of a nearby house and begins talking to us. In his hand he’s holding a clear plastic bag, filled with candy and rice crispy squares. He hands the bag to my parents and says “it’s for the children, for Halloween.” We are bemused, as it’s far from Halloween, and blown away that this man, who by any measure has far less of material value than we do, would give us this gift for no reason other than that we have come to his home with small children in tow.

Winnipeg, December 2013
I’m on my way home from university, about 5 minutes out, when my bike’s rear wheel jams. It’s winter, though thankfully not too cold, and it’s been a long day for me. I carry my bike off to the side of the bike path and place it upside down so that I can take a look at the wheel.  I spend fruitless minutes fiddling with it, unable to figure out what’s wrong and getting increasingly frustrated and frantic. Another winter cyclists comes by, jumps off his bike, and asks me if everything is ok. I tell him what’s wrong and he looks, but to no avail. He turns to me and says, “I don’t live far – if you can wait a few minutes I’ll bike home, grab the truck and drive you and the bike home.” I don’t take him up on his offer – more out of safety concerns than out of politeness – but am still amazed someone would unhesitatingly offer that to a stranger.

It is the end of the first, long day of our bike tour of the Ring of Kerry. We are exhausted, having ridden a longer distance and with more elevation than either of us is used to, and the weather, which has been kind to us for much of the day, has turned. It is now faintly drizzling, leaving us chilled. With some difficulty we have found the hostel in Kells, where we had planned to spend the night, only to find it locked and with no one around anywhere. 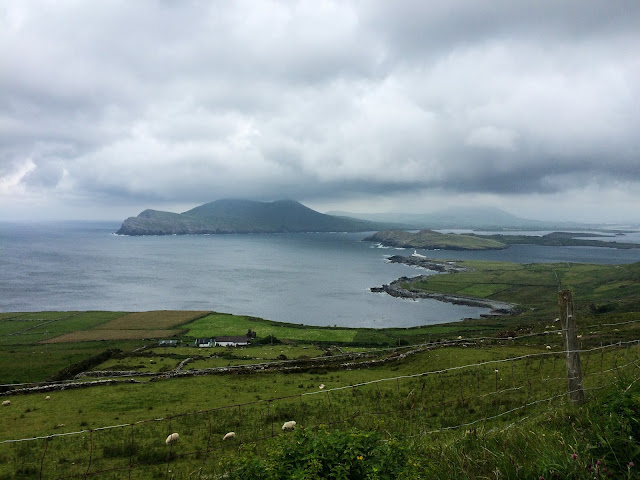 We are cold, hungry, exhausted, and starting to worry. Neither of us can stomach the thought of cycling the further 12 or so kilometers to Cahersiveen, the next larger town where we’d be more likely to have success finding accommodation.

Eventually we see people on the next property. We walk up to the closest person – a young woman around our own age – and ask her if she knows anything about the hostel. She indicates the other person on the property, probably her grandfather, who is currently mowing grass and says that he might know.
The old man finished his work and comes over. He explains that the proprietor does not usually stay around the hostel; new arrivals should call, and he’ll come over. He takes a moment to look up the number for us. When we still look at him with lost expressions, he asks if we have phones on us, which we don’t. “Would you like me to call for you?” he asks, and does so, telling us to wait at the hostel and the proprietor will be there shortly. We thank him profusely, and, true to his word, the person running the hostel soon arrives.

Winnipeg, early spring 2016
I am, once again, cycling home after a long day at university. Near the halfway point, I feel something suddenly slowing me down enormously and realize that, once again, my rear wheel has jammed. After the first time I determined what the issue was, and so I know that I could easily fix it if I had an Allen key. However, I'm not carrying one, and am stranded with an unmoving bike, my tools at least 40 minutes away on foot. Frustrated and desperate, I try to somehow shift the wheel enough to have a bit of motion, to no avail.

A car stops nearby, and a young man not much older than I am climbs out and comes over. “Is everything ok?” he asks. “You wouldn’t happen to have a 5 mil Allen key, would you?” I ask by way of reply. “Just give me a second,” he says and disappears into the closest house.

After a few minutes he returns with the needed tool. I loosen the screws and move the wheel. Seeing what I’m doing, he holds the wheel tightly to keep in place while retighten the screws, then takes the Allen key from me to give the screws another tighten. “Wouldn’t want that to happen again,” he says, waving away my thanks.

Liechtenstein, August 2016
I am nearing the end of a long, hot day solo-hiking Drei Schwestern in Liechtenstein. The hike is of moderate difficulty, but quite technical, and I've seriously underestimated the heat and sun exposure. I am tired from the day and from the dehydration that's been plaguing me for at least an hour and is starting to become concerning.

I pause to tie my boot when two men I will later find out are father and son pass me. The elder asks if I'm ok and where I'm headed today (the village of Planken, the semi-official end of the hike).
It is a relief when I reach the hut and can finally fill my water bottle. After using the hut's bathroom and tap I consider it polite to buy something. To my surprise, I spot the two men who passed me; the only free spot to sit is at their table, so I join them. They've just ordered food and dig into it while I try to catch the waitress's attention, a difficult task as the hut has suddenly gotten very busy.

"The bus," I respond, drily. I explain that I've booked a room in the country's only youth hostel, and Planken provides the only good bus connection there from the hike.
The younger turns to the elder and says, "We could give her a ride, it's right on our way, couldn't we?" It's a mark of my exhaustion that I don't protest and just pull up the location on my phone. It turns out that the hostel would be a detour; I try to insist that I could just take the bus with no problem, but both men wave away my objection.

When the waitress comes around again, the older man pulls out his wallet and pays; I try to give him the money for my beer but he refuses, saying, "what am I supposed to do with that?" I admit defeat and we hike down to their car.

The two men are from Liechtenstein. I use the drive to ask questions about the tiny country, and before I know it we've reached the hostel safely and I find myself saying goodbye to two people I barely know, who went out of their way to ensure I reached my destination without difficulty.