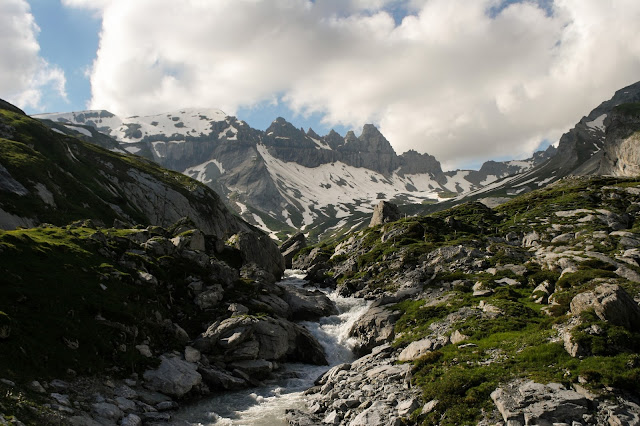 The week after my amazing first weekend in the Alps, I found myself simultaneously still riding the high from that lovely experience and eager for a repeat. But where to go?

As I mentioned in my previous post, I had forgotten everything I’d looked up in Switzerland by the time I landed in the country. But, I remembered that I’d looked up World Heritage Sites in Switzerland and some had caught my eye. Inspired by Adventurous Kate, one of my favourite travel bloggers, I’ve started loosely “collecting” World Heritage Sites and aim to visit at least one or two when I go anywhere (I’d end up visiting 3 during my time in Switzerland, if you’re curious). 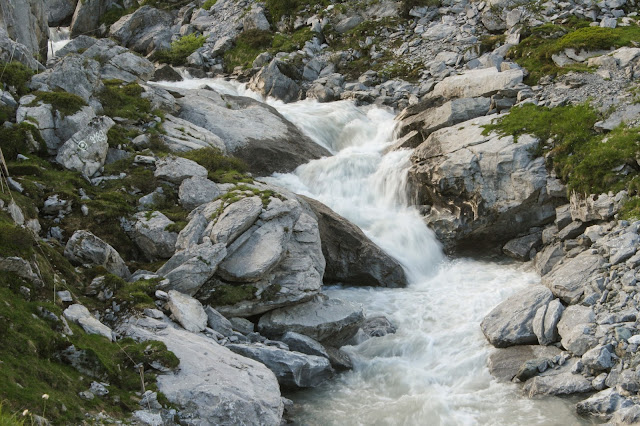 This time, there was one site I hadn’t noticed before that caught my eye: The Sardona Tectonic Area in Graubünden (Grisons) in the very east of the country. By the time I'd looked up several pictures of the area I was sold.

I decided immediately that I had to go hiking there myself. Unfortunately, finding out where, exactly those pictures were taken turned out to be a challenge. The website for the area isn’t very helpful and even the map they have is very unclear. I very nearly went to the wrong town completely, and only realized this at the last minute.
I eventually managed to determine that the mountains in the picture are the Tschingelhörner; knowing their name let me look them up and find that they are located above the village of Flims. However, despite my best attempts, I still wasn’t able to figure out which of several possible hiking trails would bring me where I wanted. This also meant that I didn’t want to book accommodation and risk it being far out of my way. I finally decided that I’d wing it – go to Flims and hope that there would be a tourist information office able to help me. Even though I was pretty certain I’d find accommodation and pretty certain there'd be a good hike, I won’t claim I wasn’t nervous when I left the Giger bar in Chur and hopped on the post bus that would take me to Flims.

Of course, as experienced travellers will be able to predict, I worried over nothing. Though I’m sure I looked pronouncedly like an ignorant foreigner, the tourist info knew what view I was talking about, pointed me towards the correct hike, and even booked a room at the hut for me to stay in as I didn’t yet have a cell phone.

In contrast to my hike the previous weekend, the gondola was busy. The town is very popular with paragliders and downhill mountain bikers, and many of these were taking the gondola up and then heading back into the valley.
From the gondola station, the trail zig-zagged upwards through a low, treeless meadow and I quickly left the crowds behind me. The view over Flims and the surrounding mountains, though beautiful (I feel like this pretty well goes without saying…) was largely unchanging for the first quite a while.
Then the trail finally levelled out and picked one direction, heading roughly westward towards the mountains I'd seen earlier. For a while it still looked as though nothing was changing; this was a tiring segment, for all that my prairie legs were grateful not to be climbing anymore, alone and exposed on a featureless hillside with the sun beating mercilessly down one me (the clouds seemed to remain in the valley and didn't come near where I was). I was well above the treeline and so there was not even a hint of shade.
After some time, I caught sight of a building that was likely the hut, which returned some energy to my steps even though it looked to be far away.
Then, suddenly, it was as though I had been transported to a different place. I was in a landscape that would not have looked out of place in Lord of the Rings, picking my way between giant granite boulders, like watchful monoliths, scattered across the landscape. 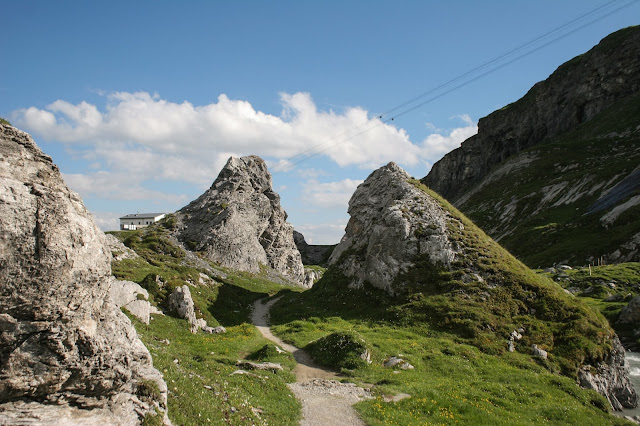 I was fascinated by the giant rocks, probably deposited by a glacier several thousand years ago. However, it wasn’t long before the rocks ended and a flat expanse opened before me.


Aaaand…there they were. The Tschingelhörner, these mountains I had planned everything around, jagged and toothy, the fault line running straight through them as though carved by a knife, by human hands.
I stopped in awe, joy suffusing me and my earlier hardships forgotten. I had made it! And a few steps further there was a sign, indicating that the hut was only a few minutes away.


The hut’s location is perfect (not until going to Zermatt, at the very end of my stay in Switzerland, would I find huts with arguably even better locations). It’s located right up on the mountainside above Flims, and so to one side there are expansive views over the town, the valley, and the surrounding peaks.

As the hut is on the east side of the valley, it’s particularly well located for seeing sunset light on the valley.

And to the other side, there are the Tschingelhörner in all their glory - this was the view I'd see later that evening, leaning out of the window in my room!

The hut itself is much fancier than the one I’d stayed in the weekend before. It has no Massenlager, only private and semi-private rooms. Though I told the very sweet hut warden that I was travelling on a student’s budget and wanted to be in the biggest (in terms of people accommodated) and cheapest room possible, she put me in a private room. I'm not completely certain, but when I paid the next morning I believe she gave me a discount, which would have been a very kind gesture.

The room itself was simple but very nice. It was at least half the size of the shared room I was living in, with a desk and wardrobe – far more space and amenities than I needed for what was essentially a place to rest my head in between hiking days. That said, the luxury of a private room made it hard for me to regret the money I was spending.

From the hut I grabbed my dinner and started walking back the way I’d come. I had seen a sign pointing the opposite way and indicating a waterfall, so I went to go check it out and see if I could find a good spot for dinner.

I got to see more of the flat expanse below the Tschingelhörner. It’s somewhat of an unusual valley, broad but longer than it is wide, with a completely flat bottom and cliff walls rising steeply and abruptly to either side. The back ascends more gradually, and to the front there is a small elevation where the hut is located before the land descends gradually towards Flims.
Much of the flat expanse is meadow, and I assume that cattle graze there at certain times of the year. A stream cuts through the valley, at times broadening to many tributaries running through a gravel field, at times narrowing to a single little stream beside the grassy meadow.

The trail skirted the meadow one side, giving me a clear view of waterfall after waterfall on the far side, and at first I wasn’t completely sure which waterfall was meant by the sign.
Once I came near, however, the waterfall was unmistakable: much bigger, twisting and thundering, huge volumes of water plunging 200 meters down the cliff face before calming into the gentle stream I’d seen earlier. 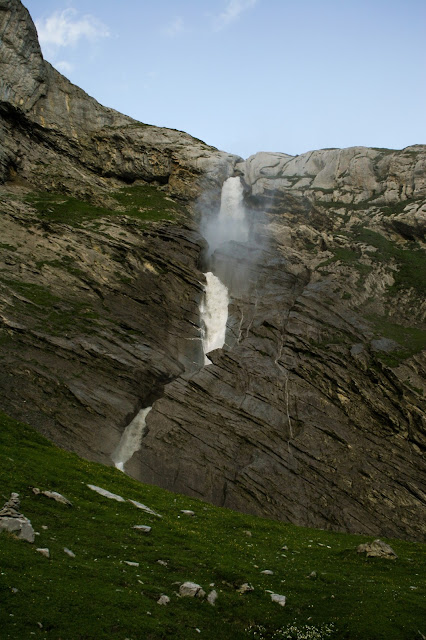 Unfortunately, my plan of a relaxing picnic dinner outside didn’t work so well. With the sun having disappeared behind the mountains, the valley got cold quickly, aided by a faint mist coming off of the waterfall, and I soon found myself shivering. I ate quickly, cutting my picnic short, and then made my way back to the hut.


Back at the Hut

The other guests at the hut consisted primarily of families, and the rest appeared to be larger groups of hikers. I saw no other solo hikers, and, unlike my previous hut stay, no other hikers willing to chat with one.

The common room was nonetheless cozy, and so I bought myself a beer and wrote for a while before reading the book I’d brought. This led to the very incongruous situation of reading Paul Theroux’s account of his overland journey across Africa while in the midst of the Swiss alps… 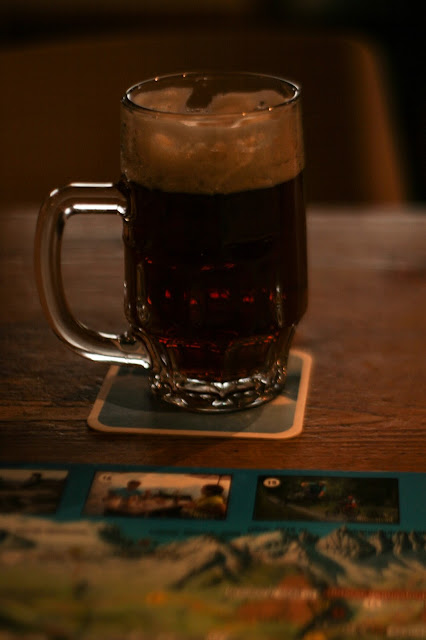 Before going to bed, I looked out of the window of my room again, and my breath caught. Here, after a cloudless day, far (relatively speaking) from major population centres and at high elevation, the sky was a marvelous blanket of stars.

I spent a few minutes simply looking at the sky before trying (unsuccessfully) to take some pictures. Then, I went to bed, eager for the coming day of hiking, and reveling in the luxury of having a room to myself the whole while. 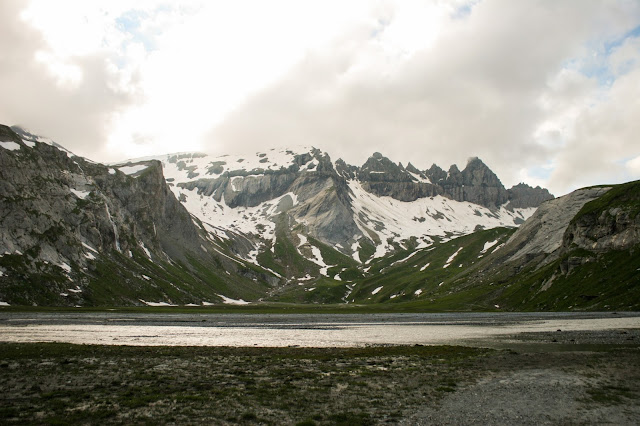 I hope to write about my second day of hiking next week. Thanks for sticking around!
Posted by Sophia at 19:35