The Best Way to Visit Jungfraujoch

I find myself continually apologizing for delayed blog posts, and this one is no exception. I'm still trying to get back to a regular posting schedule since getting home, but school and work keep getting in the way. I'll do my best to post regularly again, however!

I also wrote a blog post for the ThinkSwiss blog on my research in Switzerland in between this and my last post on here.

Alright, alright, I’ll give away the answer to my clickbait headline right at the start. The best way to visit Jungfraujoch, one of Switzerland’s most popular tourist spots, is…*drumroll please*…as a scientist. 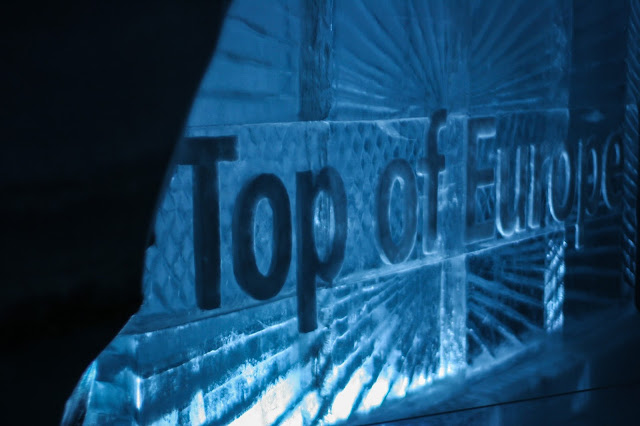 Not really an accessible way for most people…sorry!

So what exactly is Jungfraujoch? Jungfraujoch is a col or pass between the famous peaks Jungfrau and Mönch in the Berner Oberland (a region I had already visited once, albeit in a fairly different corner). Glaciers fall away to either side of the col, leading to views that are, understandably, a big draw for tourists. Particularly attractive are the views over the Aletsch glacier, the longest in the Alps. 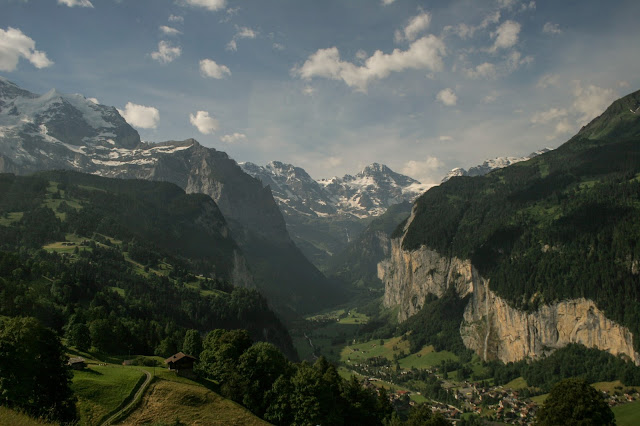 There is a train station located on this col that bills itself “The Top of Europe” (I’m sure alpinists would disagree, but, well…). It also happens to be the highest train station in Europe. Attached to this train station are the usual tourist things you’d expect – restaurant, gift shop, activities and traps/attractions, as well as panoramic windows and observation platforms. More on all of these in a bit.
One section of glacier (not the Aletsch side, but the much smaller Chilouwenen glacier on the other side) is roped off so that you can safely walk out on to, a very (pun unintended) cool experience particularly if you never done anything like it before. 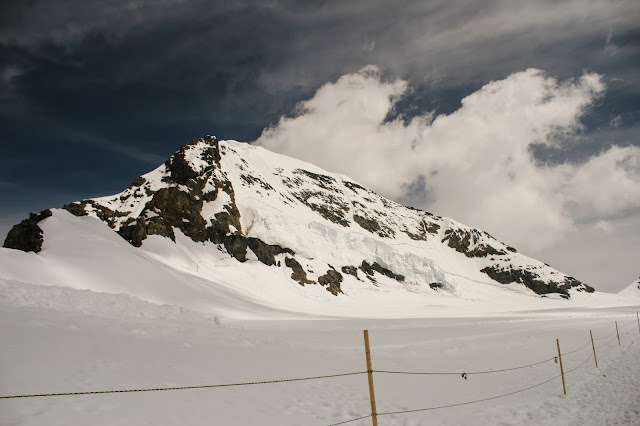 What many people don’t know, however, is that in addition to all the tourist amenities the Jungfraujoch is also home to a high-altitude research station. In fact, when the (private) railway company came to the government with the proposal of building a the Jungfraujoch railway station and the line leading up to it, the cantons of Bern and Wallis (on whose shared border the station lies) agreed on the condition that the railway would also build and continually support a research station up there.
The initial focus of the research station was astrophysics, particularly cosmic ray research. The higher above sea level you go, the less the atmosphere gets in the way of what you’re measuring, so a research station at 3450m (11 319 feet) above sea level is a beneficial thing for astrophysicists. The station was later expanded with the addition of the Sphinx Observatory, which sits above Jungfraujoch, nearly 3600m (11 811 feet) above sea level.
These days, the astrophysicists have mostly moved to other locations and the research being done at Jungfraujoch and Sphinx is primarily atmospheric and climate research.

It so happens that the research I went to Switzerland to do was climate research. Specifically, the research group I was in uses glaciers to track past changes in climate and atmospheric pollution. If you’re curious, I talked briefly about my research in my introductory post about Switzerland; I’ve also written a more detailed post for the ThinkSwiss blog, linked to at the top of this post and again here.
All in all, I think it’s fairly logical why our research group would go up to the Jungfraujoch. The purported reason for the trip was to get a demonstration of a new type of ice core drill and to learn about the research related to our own topic being done at the research station, though I’m not convinced the main reason wasn’t to have a fun excursion as a group.
After getting off the Jungfraujoch railway, we went into the research station. Here, we had a quiet, private place to leave our bags and eat our lunches. However, lunch came later; first, we took a coffee break (you may be noticing a theme in my blog posts here…but hey, they're good for you!) before going out onto the glacier. Much like the tourists, we went onto the Chilouwenen glacier, but we had our own section separate from everyone else. I’m not going to say I didn’t feel slightly smug walking past the crowds to our very own section of glacier further out…
Here, we got a demonstration of the new ice core drill. Many of the group has seen a drill in action before, or even operated one themselves, but I hadn’t and so I found it really neat to see the drill and get an explanation for how it worked.

A number of my labmates were more interested in having a snowball fight than watching drills…
We got very lucky with the weather as well: the forecast hadn’t been too optimistic but we had sunshine and some blue sky while out on the glacier. Of course, the views over the surrounding mountains are stunning no matter what.
From there we went back in to the research station to eat and learn some more about the history and research. On the top floor of the research station is a small library with big windows overlooking the Aletsch Glacier, and it was here that we listened to a talk on these topics. The library was freezing cold, otherwise it would be the kind of room I could spend hours in: small, cozy, lots of books and seating, and fantastic views.

Then, we went on what was my personal highlight of the day: a tour of the Sphinx observatory. There is a level that everyone can visit, with a large observation deck overlooking the Aletsch glacier, but we were led past that to the top floor of the observatory.

Here, there are numerous instruments for atmospheric measurements of various types.
There is also a second, even higher observation platform up here that isn’t accessible to the general public. One person, when I told them about this platform, commented, “so you mean you were above the top of Europe?”
The views from the platform are utterly spectacular. You have nearly 360° views over the surrounding peaks of Mönch and Jungfrau, and down over both glaciers and into the valley towards Lauterbrunnen. 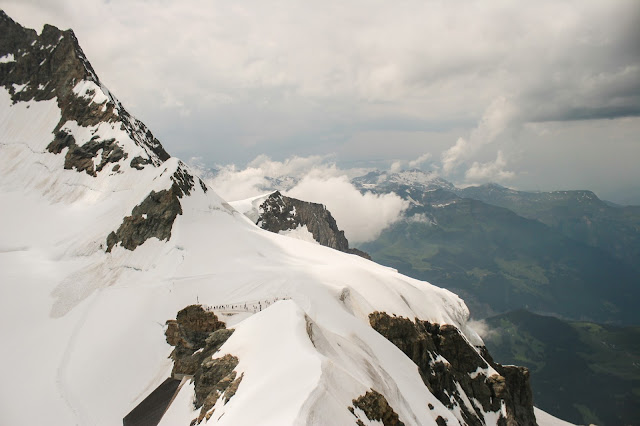 Walking out onto the platform I couldn’t help stopping and exclaiming in awe. One of my coworkers, who’d been several times, smiled back at me and said “it is spectacular, isn’t it?”
And yes, many of the clouds were below us!
This was the last part of the organized program for the day. We now had some free time before taking the train back home, so most of us went to check out the tourist attractions.

Aside from the views and walking out onto the glacier, there are a number of other tourist attractions (and/or traps, depending on your perspective) at Jungfraujoch. These include sledding on and ziplining over the glacier, several short hiking trails set over the glacier, an ice cave, and, um, a Lindt store (it calls itself a “chocolate factory” but is really only a store with a few videos sort of showing how chocolate is made). Because this is Switzerland, there is also a watch store up at the Sphinx, which struck me as quite incongruous.

I would have been interested in the trails across the glacier, but time was short. I was also tired at this point and feeling the effects of altitude quite strongly. I decided that the ice cave (and the chocolate store, unsurprisingly for those that know me!) were what interested me the most.
I can’t quite decide if I thought the ice cave cool or kitschy…probably a mix of both. The “cave” is really a tunnel bored through the glacier ice and containing statues and other little features carved out of the ice. Seeing the ice from the inside is really neat, the statues quickly cross the line into kitsch territory. I didn’t get many good pictures (I hadn’t figured out iso settings on my camera yet, haha!) but if you know what you’re doing there are some fun photographic opportunities in this cave.

After a quick stop at the gift shop to buy postcards (a few of you reading this will have received these!) and some chocolate, we headed back to the train and our, um, four-hour ride home (yay!). Being me, I used the train ride to talk to nearly everyone in the research group I hadn’t yet gotten to know.
It as a very fun day, but very intense: between leaving and returning to the train station in Brugg we were out about 14 hours and I was exhausted when I came back. I had also spent the weekend before hiking (post on that coming soon; it was near Chur, which I talk about in my last post) and had experienced delays coming home, adding to the stress, so I was not terribly surprised when I came down with a nasty cold the day after Jungfraujoch.

Jungfraujoch is at a high elevation, and I was feeling that! I was lightheaded and dizzy from before I exited the train until we made it back down to a reasonable elevation on our way home, and this despite spending the weekend hiking at elevation.

I will say that visiting Jungfraujoch as a scientist is the way to do it: you avoid the tourist crowds and get even better views…and of course the chance to learn about the science being done there, always a bonus for the giant nerd that I am.

Thanks to the research group for giving me the opportunity to visit Jungfraujoch in this fashion, and to my coworkers for the pictures and for making the excursion an enormously fun day!