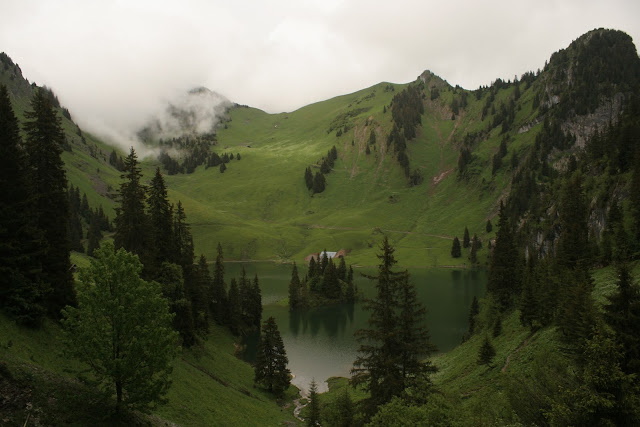 Well, I've been in Switzerland over two weeks now, so I decided I should probably write something (then again, considering how far behind I am in posting anything else...). This here will be a quick overview of what I am doing - and have done - in Switzerland to date.

I am at the Paul Scherrer Institut, a well-known (in Europe) research institute in the northeast of Switzerland. Everyone just refers to it as PSI. You can see it on the map here. It's around half an hour to Zürich and somewhat more to Basel, and it's also close to the German border (more on this point in a moment).


For some strange reason, the institute itself is out in the boonies, with only two small villages nearby. Switzerland is small, and public transportation is excellent, but it's still kind of frustrating that there's really nothing to do around the institute itself.
I'm staying "on campus". There's a guesthouse here, aimed at both students who are here longer-term like myself as well as researchers who come from all over Europe for a week or two to do measurements (for those of you who are in science, there's a light source, a neutron source, AND a muon source here, so lots of people come!).
I share a room with another summer student, who I rarely see because we keep very different hours. The setup is fairly communal or hostel-like, with several shared washrooms per floor and a shared kitchen and lounge/common room. The single worst aspect is only having a tiny mini-fridge per room, which means that I get half a mini-fridge for all my food. It's been pretty hot here for about the last week, so trying to prevent food from spoiling has been a challenge.
Anyone that's stayed in a hostel will have a sense of what the atmosphere here is like: very friendly, social, and communal. I was quite touched when, on my first day, someone talked to me and invited me to join the chatty group sitting in the kitchen. As it turns out, this group is the social heart of the guesthouse, and that was all it took for me to "join".
People are quick to make friends here, I think due to a combination of all of us coming in from outside and usually alone (so if we don't band together we don't have anyone), and due to the transient nature of life here (if you don't make friends quickly, you won't make friends before you have to leave again). The people also aren't clique-y, which could easily happen in a place like this too; instead, almost everyone is extremely open and welcoming.
We're also an extremely multicultural group. A good chunk of Europe is represented in the guesthouse (off the top of my head: Germany, France, Spain, Italy, the Czech Republic, and Poland, plus an Irishman and a Slovak who aren't living here but do hang out with us). A few others come from further afield (Russia, Georgia, and Iran), although I'm currently the furthest! (Unless you count the Chinese guy who's also living off-campus but hangs out with us, then I'm not sure who's from farther away...). It's a lot of fun to walk in on conversations in all kinds of languages (although people mostly talk English) and to compare cultures, attitudes, and politics between our various home countries.
As I mentioned, we guesthouse residents are a very social. We have regular BBQs and parties, and often do excursions together on weekends.
People are also very communal - we share food and, um, drinks freely, and those with cars are usually happy to take a carload of people wherever they go. It's about half an hour by car to go to Germany. Switzerland is ridiculously expensive, and so most food and in particular alcohol is a lot cheaper across the border. There's at least one driver going across every week. 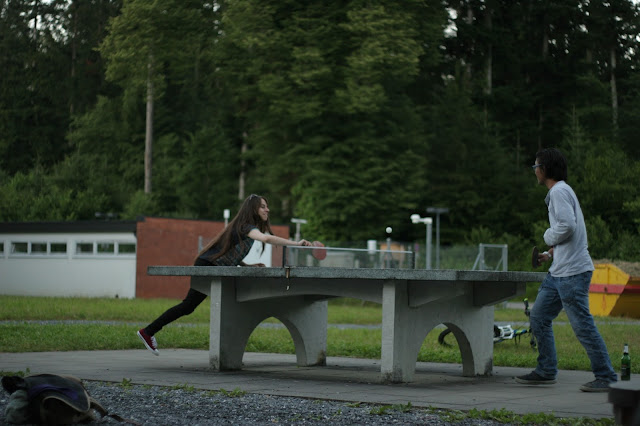 Put a large group of students, cheap alcohol, and little else to do together, and...I'll let you fill in the rest (Oh hi mom! Didn't see you there! I don't drink a lot, I promise...*forces grin* *waves* *runs away*). Of course, it's also currently Euro Cup time, just to make things even worse.

(Other than drinking beer and watching the Euro Cup, I mean).
Many of you will know that I'm in Switzerland for an internship/exchange related to my field of study. I am here on a ThinkSwiss scholarship, which is a scholarship program aimed at bringing North American students to Switzerland for summer school or summer research terms. It's really cool! It's also quite competitive, so I really wasn't expecting to get it. When the e-mail notification came, I spent a few seconds staring at the screen in disbelief before the words actually registered in my brain.
More specifically, I'm doing a research internship with the environmental/analytical chemistry group. One of the group's primary focuses is studying ice cores drilled from glaciers and ice caps to figure out how the climate as well as levels of all kinds of pollutants and other chemicals has changed over time. This research provides data like the famous CO2 curve (this is not, to my knowledge, research that the group actually did, but it's similar to what they do).

My own project is to analyze two shallow (ie. short) ice cores. This is great as a summer project, because it's hopefully doable in the time I have, so I'd have a self-contained project, and because it enables me to do a bunch of different things and learn/try a number of techniques. So far, all I've really done is background reading (lots of background reading!), familiarizing myself with the lab and the research group, and getting introduced to the techniques and method of working. Anyone who's done research will be intimately familiar with this stage of the work...and the associated tedium. But, well, it is a part of doing research, and hopefully I'll get properly started soon.

What I've done so far

Of course, a lot of time here is spent in the lab, and when I'm not in the lab and not spending time on the things one needs for living (grocery shopping, cooking, doing laundry...) I'm often socializing and, of course, watching soccer. But, I've still managed to actually do a few things.

The closest village to PSI is Villingen. It's tiny, and this strange combination of being a rural farming village and a bedroom community both for PSI and Zürich. When walking into the village, you see houses with chickens in the front yard juxtaposed with modern apartment buildings. 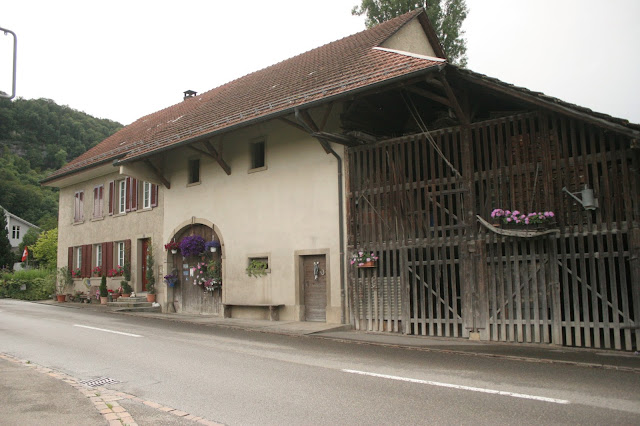 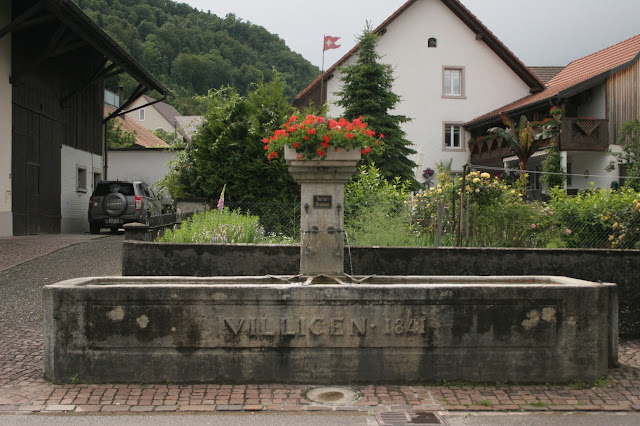 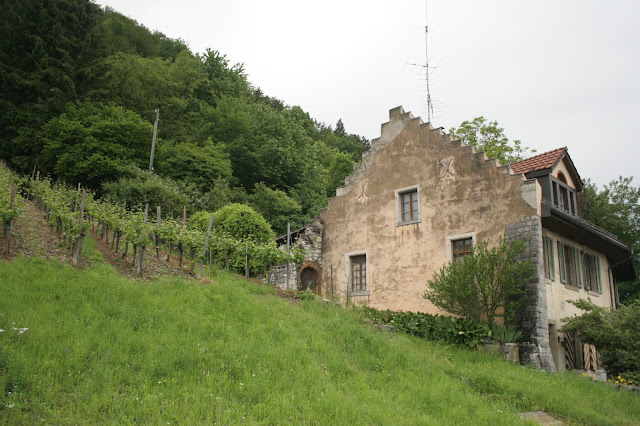 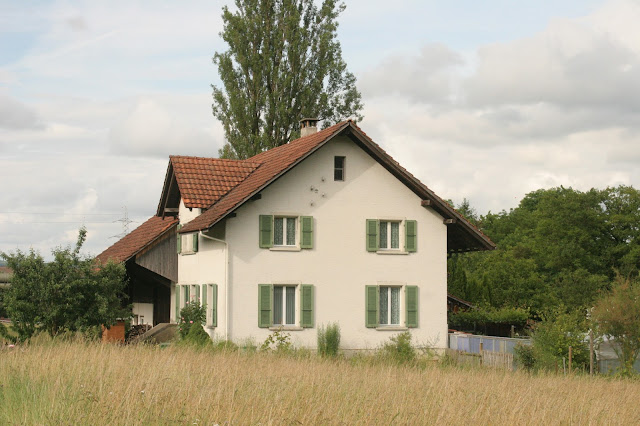 Brugg is the next bigger town past Villingen, about 20 minutes by bus. I went there one evening to run some errands, and since it was a nice day (and those have been rare since I came here!) I took a bit of time to wander around and take pictures. My housemate likes to complain that Brugg is boring - and since I was there around 7 pm on a weekday and everything was closed I think he may be right - but it's very photogenic and I had a lot of fun walking around with my camera. I have enough pictures that I think I'll toss them in a separate post and leave you with a little teaser here: 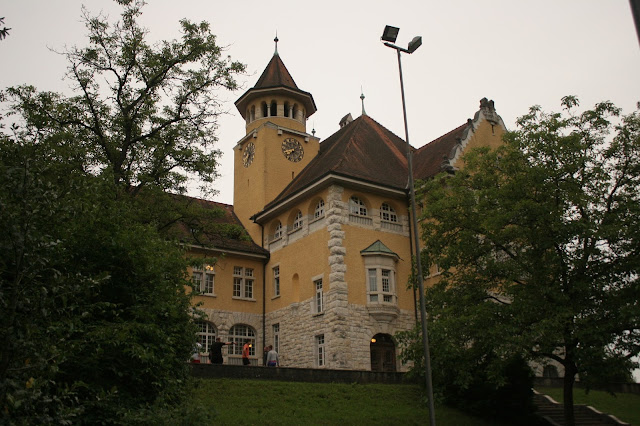 My first weekend here was spent getting settled; that's when I took most of the Villingen, PSI, and countryside pictures in this post. The second weekend, a group of us went to the Rhine Falls for half the day - apparently Europe's biggest waterfall, by whatever criterion they determined that. This excursion should also get separate post (or maybe I'll lump it together with Brugg?).

As an aside: I had grand plans of making one giant post about everything I've done in Switzerland to date...I'm increasingly realizing that's not going to work well. Guess I'll have to try and be a bit more on top of posting here instead... #itried
The other day that weekend I did a little hike just above PSI. If I'm going to be honest, the hiking here isn't all that interesting (mostly forest, no mountains), and I'm not sure I'd do it again.
The housemate who suggested that trail uses it for running, which would be better (less trudging through endless forest, and getting to the views faster). 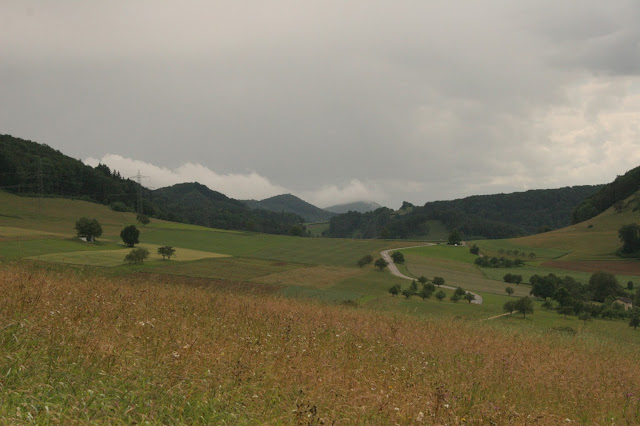 Still, I needed to get out and moving, and stretching my legs (as well as the peace and solitude I found in the forest) felt very good. I also hiked it in the right direction - forest for the first half, views for the second. 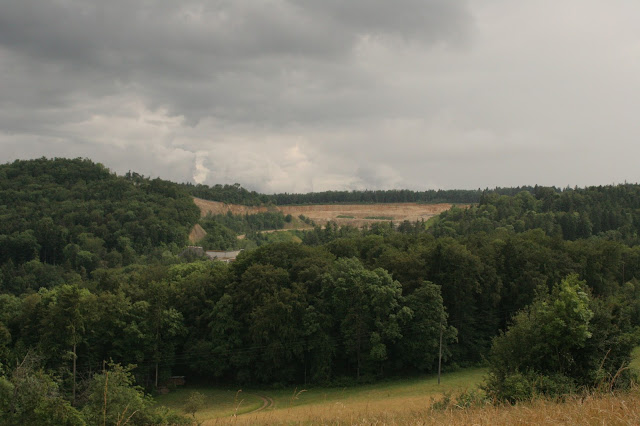 Also, I managed to get chased by a herd of cows near the end of the hike...I'll let you guys fill in the mental images of that ;).
Finally, this past weekend, I made it out to the Swiss Alps! The first picture comes from that trip, but this one definitely deserves its own post.

More Switzerland posts are coming, and I will continue posting about last year's Europe trip as well. Thanks for sticking around!
Posted by Sophia at 12:02