After my post on Montreal a few days ago, I've jumped back to last year's Europe trip for this post. From the Saxony Switzerland region in Germany, which I posted about before Montreal, we hopped on a train and went onwards to Prague.


Oh my goodness, Prague. Where do I even begin to describe Prague? It was beautiful, amazing, touristy, wild, crazy, shocking…

That last point began even on the train ride there. Oftentimes, when you cross a country border, there is little or no change (think of the US-Canada border. If not for the border control – of course – you’d never know you were suddenly in a different country). Not so with the Germany-Czech border. Tristan and I spent quite a while discussing what, exactly, the difference was, and weren’t able to really put a finger on it.

I think the difference can be summed up with this: the Czech side of the border looks less nice. Whereas the German side had been pristine, with sweet little villages of red-roofed brick or half-timber houses in marvelous condition surrounded by green forest, the Czech side had factories, supermarkets, cargo barges on the river (and thus freight harbors), ugly new apartment blocks surrounding those same little villages – and also, as far as I could see, much more decay than Germany. Tristan summed it up well later when he said it looked distinctly Eastern European, which neither of us had seen before.

To be clear: I attach no judgment to this. I do, after all, come from North America, and I’d say the towns looked no worse and quite possibly better than your average North American town. As well, the Sächsische Schweiz is one of the nicest and most pristine area of Germany I’ve seen; it’s not like the country doesn’t have its own big cities and industrial areas (if you know anything about Germany’s economy, you’ll know it’s more like the opposite…)

Anyways, the sudden and unexpected change, as well as a large influx of people onto the train as soon as we crossed the border, and a language barrier, and we found ourselves mildly culture-shocked.

Thankfully that feeling didn’t last, and the next morning found us ready to explore the beautiful city. First stop? Being massive tourists and visiting Prague castle.

The castle is HUGE. I’ve been in and around quite a few European castles and none that I can remember compare to the sheer size of this one. We got lost in the gardens just trying to find the entrance. Not that we minded, since they’re beautiful and provide lovely views of the cathedral and other castle buildings! 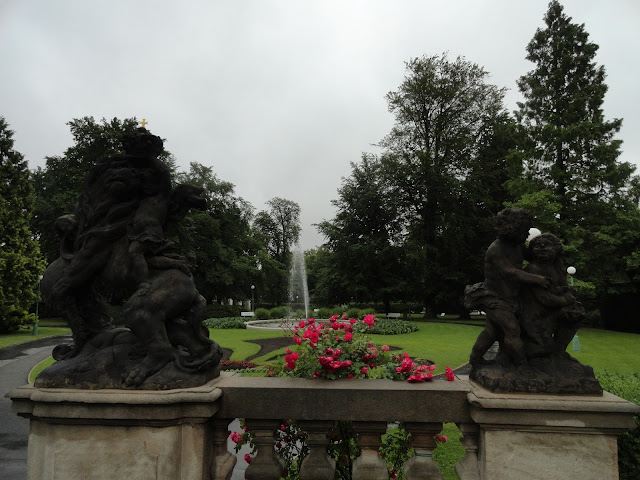 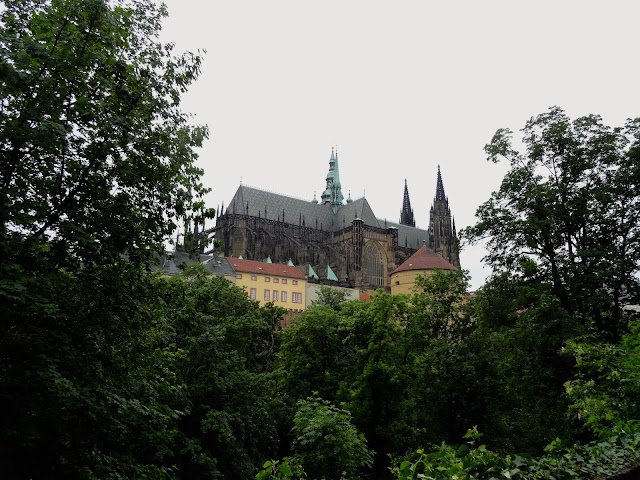 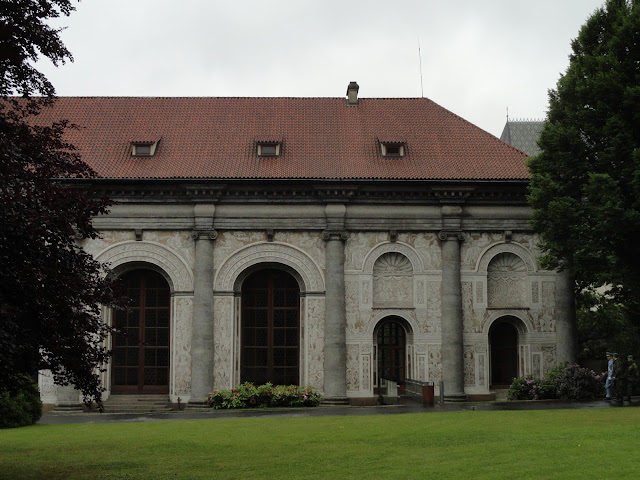 Just look at that detail! 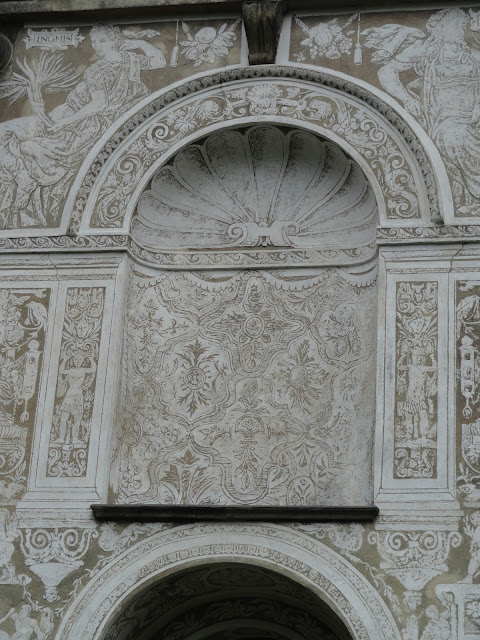 I liked this greenhouse too, although it’s obviously not historic. 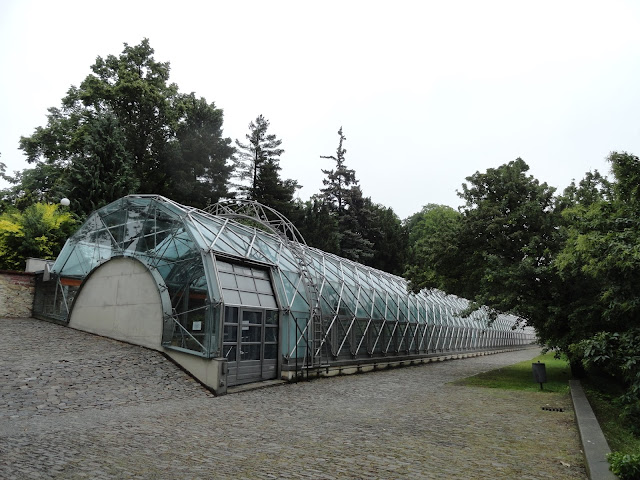 That was just the gardens. The castle complex itself is enormous, and you can’t even visit all of it since some of it is the president’s residence. There are (ceremonial) guards by the main entrance, much like the ones in Buckingham Palace. We were lucky enough to catch the changing of the guard when we walked in! I felt too bad for the guards to take pictures (everyone was shoving cameras in their faces all the time), but Tristan did get one in:
First stop: the Saint Vitus cathedral, which is fairly centrally located in the castle. This church is another magnificent gothic cathedral. 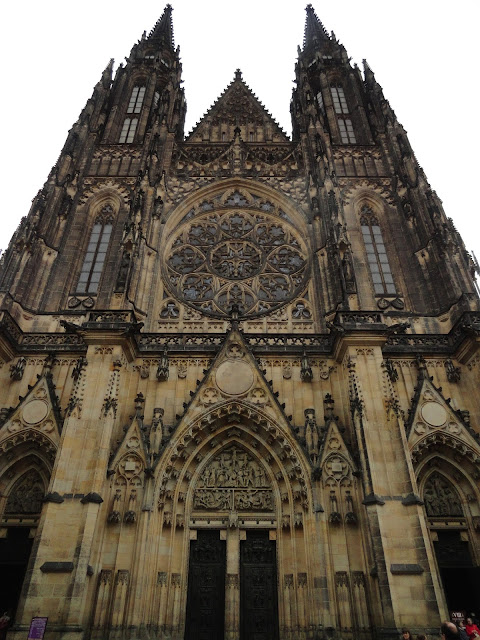 The best part was climbing up its bell tower, which gives you absolutely spectacular views of the city (note that this is not included in the castle admission; you have to pay a bit extra). 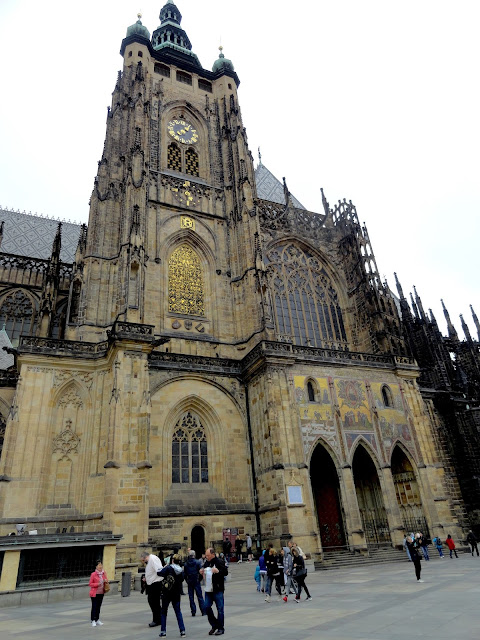 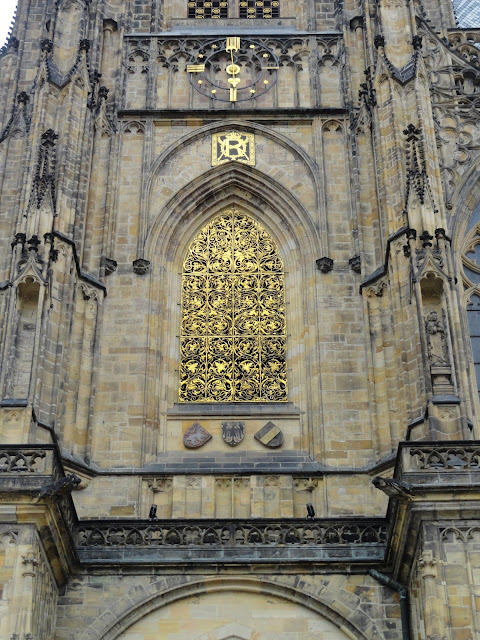 Highlights included seeing the stained-glass window from the inside 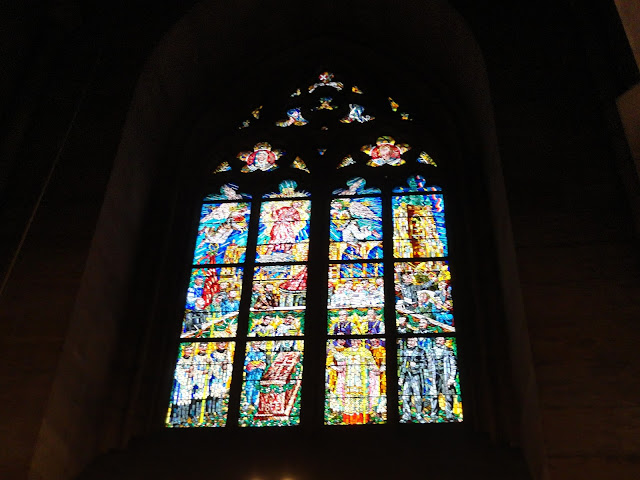 The clockwork (both of us find clock parts fascinating) 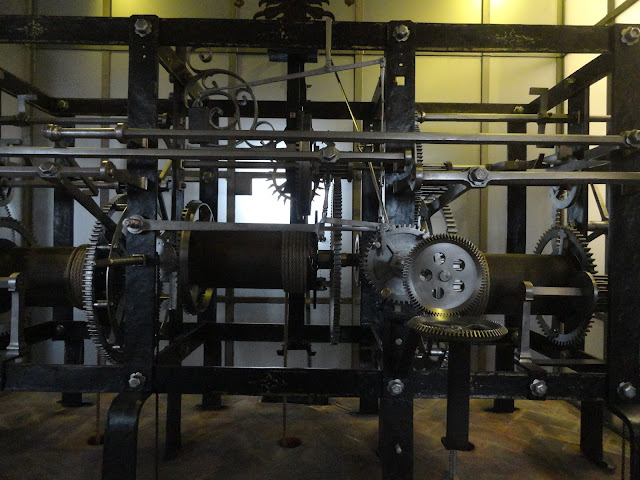 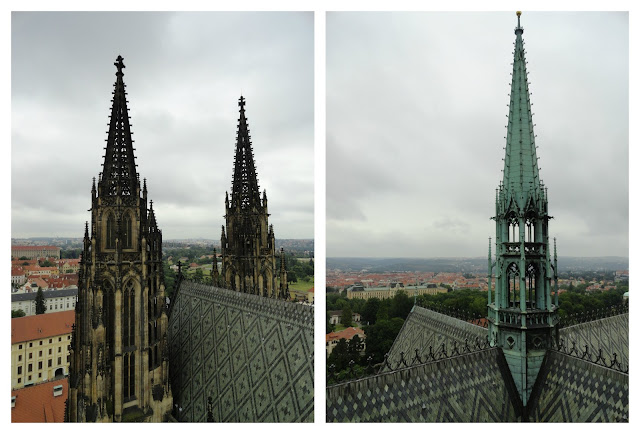 The climb was followed by some more wandering around the castle complex. 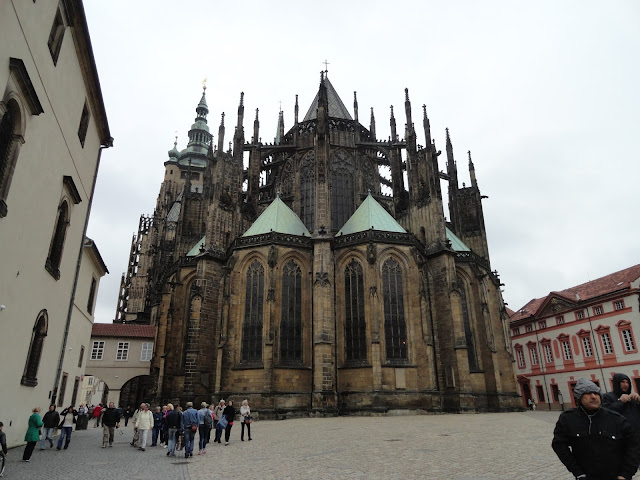 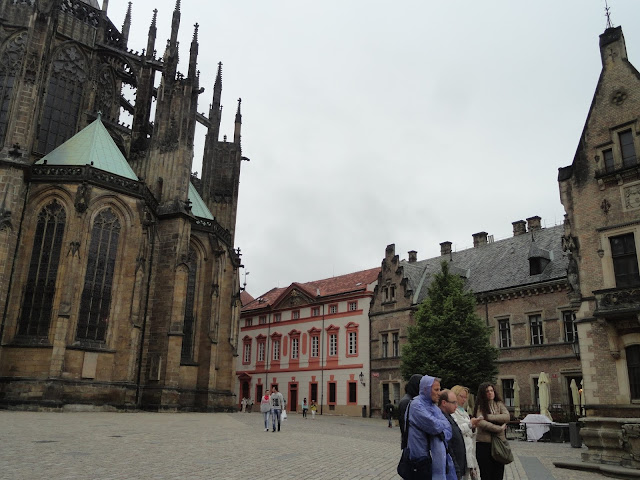 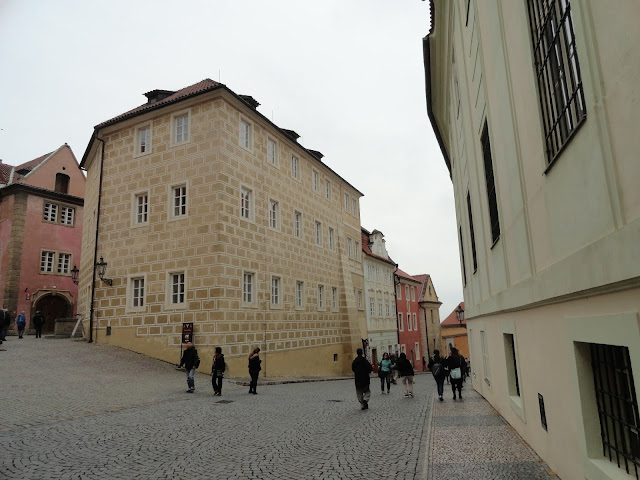 I liked finding another fresco of Saint George killing the dragon! (I did promise you guys more dragons...) 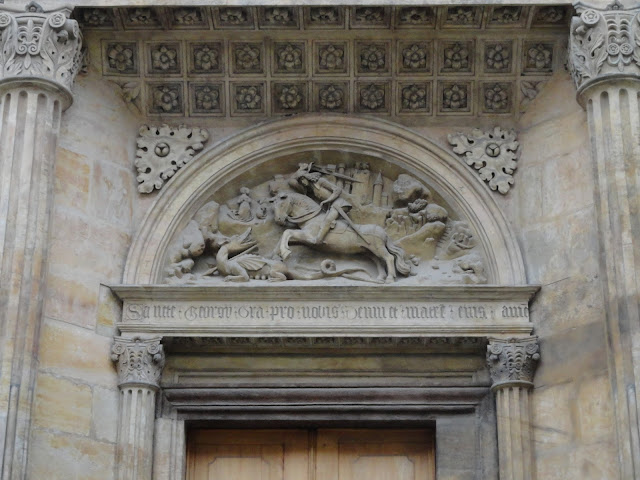 This was above the entry to the – you guessed it – the Saint George’s basilica. This church is the oldest in the castle complex (the facade is much newer). 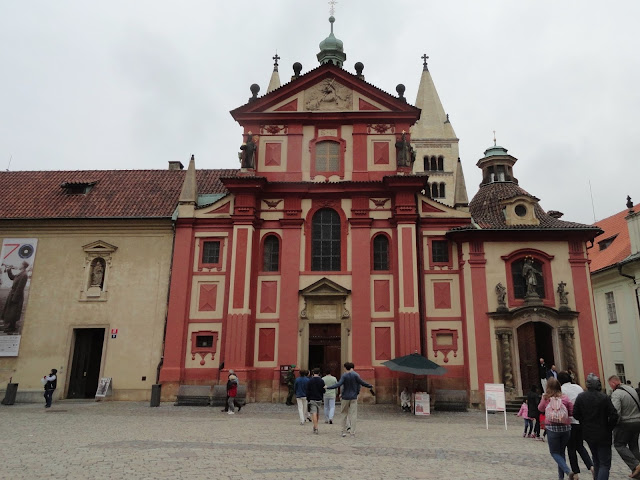 In contrast to the ornate facade, the interior is very simple. We couldn’t take pictures, but you can see some examples here and here. I really loved that altar design!

After that came the old palace. The palace has been the seat of various rulers for many centuries, most famously the Habsburg family of the Austro-Hungarian Empire, so there is an incredible amount of history. You start and end in the great hall, which is pretty neat. It has a really beautiful ceiling of interwoven arches that manage to cleverly support the ceiling without the need for pillars in the middle. For some reason neither of us got pictures of it, but you can see it here and here.

There is also a staircase that leads into the hall that’s interesting because of its design: each step is extremely long and low, which allows people to ride horses straight into the hall. Here's a picture, so you can get the idea.

From the great hall, you go up a spiral staircase to the old royal apartments. There was a self-guided tour for this section but I found it quite confusing, so we mostly just admired the architecture (admittedly, the fact that I'm not very familiar with pre-WWII European history probably didn't help). The coolest part of this section is seeing the window where the Prague Defenestration took place, which is generally considered to be the event that set off the 30 years' war.
From these we went into the Golden Lane. This is a really famous portion of the castle. At some point in the castle’s history, the castle guards began building apartments into the castle’s defensive walls, initially for their own families and later to rent out to artisans and other people from the surrounding town. A lot of people enjoy the alleyway but I felt somewhat torn. (Also, for some reason, neither of us got pictures of this section).
I guess I’m used to very affluent countries (Germany, France, England…) having castles that I visit. In such places, you pay your admission, and then visit a castle that’s been turned into a museum; and I don’t get bothered again until I leave.

First, the good: a visit to the alleyway started with a walk through a defensive corridor built into the castle wall. This isn’t the kind of thing you see often, and I thought it was really cool to walk through such a corridor (though renovated for modern audiences).

From there we went into an old weapons collection (primarily swords, with a few old muskets and other guns on display). Tristan, who likes old weapons and has a certin knowledge thereof, thought it was really fascinating. I, being a huge fantasy (book) lover, really enjoyed seeing different weapons I’d read about in real life. The collection was remarkably extensive, organized by year and labelled by type and origin. There was also – in a separate room – a display of medieval torture instruments. It was extensive as far as such collections go, but we had already seen some of the same in the previous castles we went to, and neither of us really wanted to spend much time there.

From there we went into the Golden Lane proper. The Golden Lane consists of little rooms – or apartment-style sets of rooms -  carved into the castle’s defensive wall, which is really cool in and of itself. On top of that, most of the old rooms had been decorated in period style, showing different types of people who would have lived and worked in the lane. There was a guard’s quarters, and seamstress’s and an herbalist’s shop (I really liked both), rooms of some famous citizens of the alley, and – my personal favourite – a tiny tavern. I liked the tavern not just because I like pubs a lot, but also because it was really cool to see a replica of the old taverns I’d read so much about, and because the setup of the tavern was a remarkably ingenious use of space.

Now the bad: the whole thing felt very commercial, and I felt like someone was trying to sell me something at every corner. I didn't mind the craft shop in the Lane, as it fit nicely, and I don't - to be clear - mind gift shops at the end of castle tours. That said, I'm used to paying my admission to a castle and then being allowed to look at its sights in peace, rather than being constantly bombarded by ads and people trying to part me from my money, which is how I felt at the Golden Lane. I will say, in fairness, that I have yet to go to Southeast Asia - from what I've heard, I'd feel differently after that! - and I definitely still enjoyed the Golden Lane.

At this point it was almost closing time and we were pretty tired, but being the *coughs* determined (read: stubborn) people that we are we had to try and see one more sight, so we ran back to the Rosenberg Palace. This is a pretty building, of a style fairly different from the rest of the castle. Inside, there was an exhibit on the palace’s time as a residence for unmarried noblewomen, including period furnishings from the 18th century. We really enjoyed the interior of the palace as well as the furnishings and decorations. Sadly, we had little time to read the exhibit (for me, anyways; I’m the more avid exhibit-reader of the two of us).

So we got to see almost all of Prague castle; we skipped the powder tower due to a lack of time, and we didn’t go to the exhibit on the castle’s history. We were more interested in playing tourists and seeing the "sights" of the castle than reading history (in hindsight it might have been a good idea to go to the history exhibit first, since it would have put all other parts into context – my Bohemian and Austro-Hungarian history knowledge is nearly nonexistent – but oh well. You'd be hard-pressed not to get a lot out of a visit to the castle!).

We wrapped up our long day of sightseeing with a quick walk over Prague's most famous bridge, the Charles Bridge, and a climb up the bridge tower on the Old Town side (across the river). You pay a little bit of admission for the tower, but you get lovely views over the old town of Prague (Staré Mĕsto) as well as the castle district (Hradčany ). I'll wrap up this rather picture-sparse post with some more pictures from the bridge and the tower (note that all of these are by Tristan. For some reason I didn't take pictures here.)

I'll post about our second (and last, sad face) day in Prague next time I write about our Europe trip last year, and it will have more pictures and less text, promise. I will try to get a post or two about my more recent adventures in first, however, but that I won't promise!
Posted by Sophia at 12:55