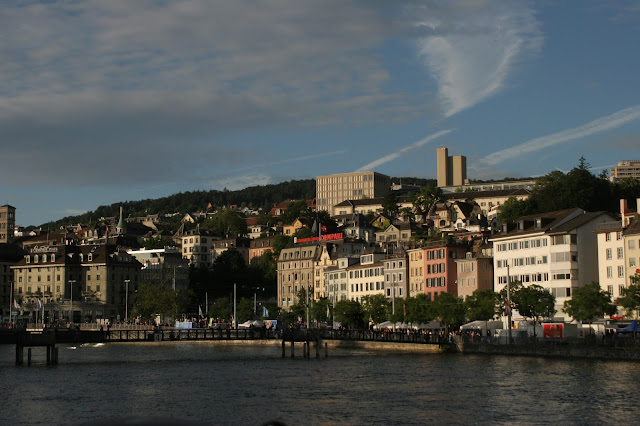 Despite Zürich being the next closest city to where I’m living in Switzerland, I have to admit that I’ve passed through and changed trains there far more often than I’ve actually been there…#badtourist #immoreinterestedinhiking #sorrynotsorry

I’ve only been to Zürich twice, both times only for fairly short visits.

My first visit to Zürich happened early in July, on the occasion of Züri Fäscht (literally “Zürich Fest” in Swiss German). As the name indicates, this is a huge city/street festival that Zürich puts on every 3 years (the next one is in 2019, in case you have the desire to plan a trip around it!). I’m a fan of street festivals and am always happy to catch one if I can, so I was determined to make it to Zürich for this one. Added bonus: finally getting to see something of the city! 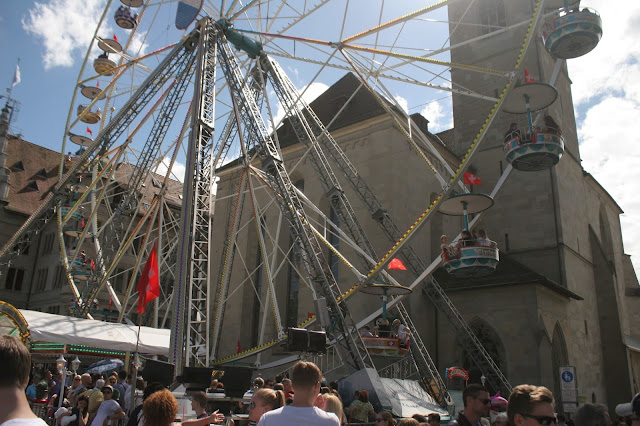 So, I organized a group of my housemates, and off we went. 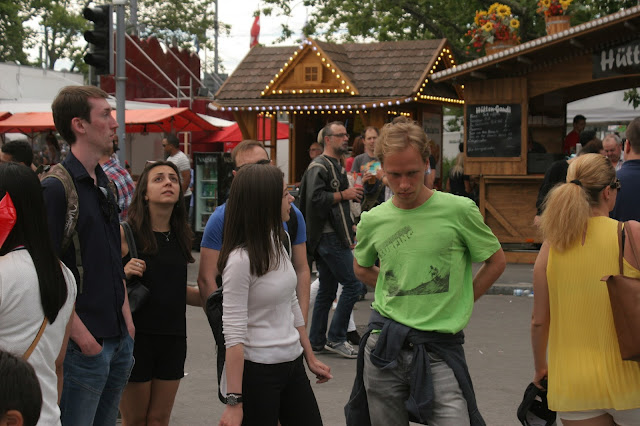 The festival was pretty well what I'd expected - crowds of people, food stands lining street after street, music around every second corner. I was somewhat surprised by the proportion of food stands relative to everything else (I was expecting more random stuff sellers), and impressed by the variety of food on offer. I tried my first-ever mango lassi and later had a pretty decent veggie fajita for dinner.
I have to admit that what really surprised me (though in hindsight I should have expected it) was just how many beer gardens and people drinking there were. You see my North American sensibilities here - our city festivals tend to be much drier events, and you could never have stand after stand casually selling liquor on the street without any kind of fencing or separation with our liquor laws. Andere Länder, andere Sitten as we say in German ("other countries, other customs" is the rough translation)...
Of course, the scale of a fest that involves a big city and happens only once every 3 years is going to be bigger in scale than your little neighborhood fest. Züri Fäscht delivered on that count. Among the sights we saw (and there are many that we didn't) were wakeboarding on the river... 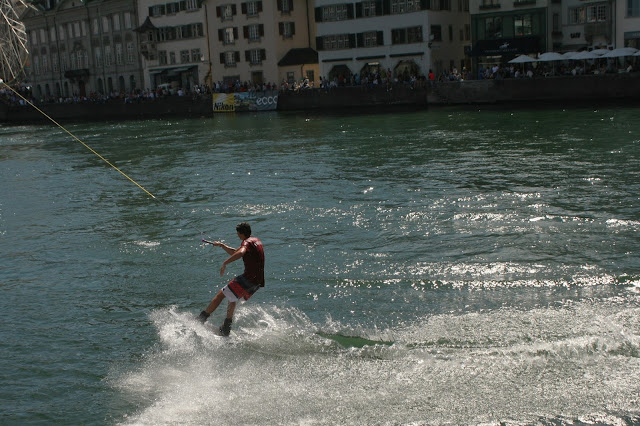 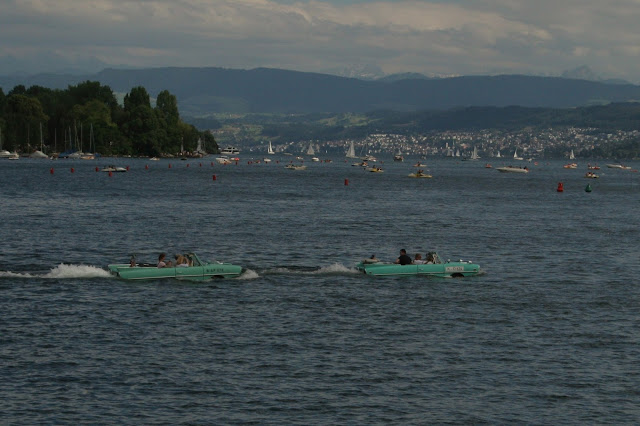 One big attraction the fest also advertised a lot was the air show over the lake. This show went on nearly continually for much of the day. We caught a segment of it when we decided to stop for a cold beer by the lakeshore and were treated to some synchronized helicopter flying. I was highly impressed - I had no idea you could do such maneuvers and fly with such precision in helicopters. 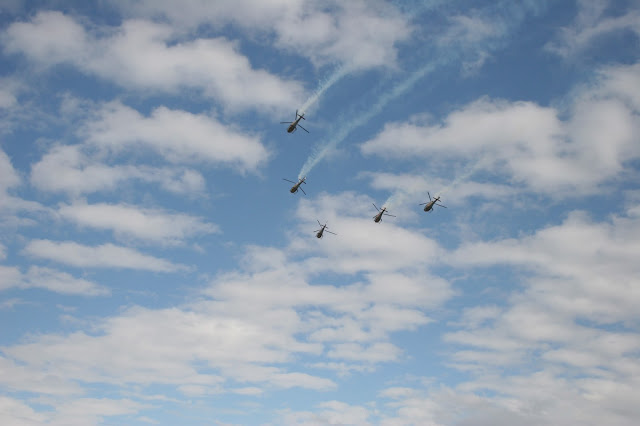 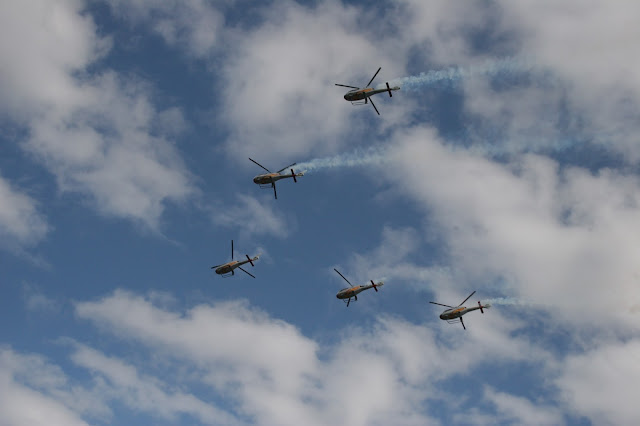 Our original plan was to watch the game (France vs. Iceland in the Euro Cup Quarter-Finals) at the festival, at one of the many public viewings. Then we realized that getting home was going to be a difficulty...which highlights a particular frustration of where I live: while the trains from Zürich to the surrounding area run late (and they waived the night surcharge for the duration of the festival, a nice idea), the bus from the train station to the institute doesn't. I guess we're either too far away or too small to warrant special Züri Fäscht transportation, but it would have been nice to have the possibility of staying late at the festival, especially since my impression was that the evening - particularly the fireworks over the lake, which started quite late - was the highlight of the festival. 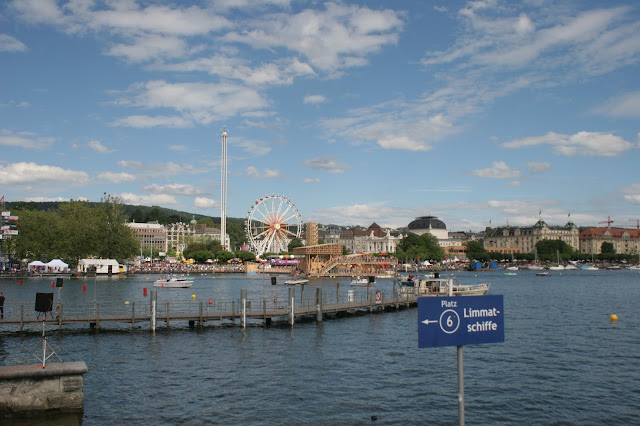 Due to timing and train issues, we ended up watching the game not at home, but at a bar in Brugg. Though not quite the atmosphere of a public viewing, it was still neat (despite my boys Iceland losing and going out of the cup #stillheartbroken).
Overall, Züri Fäscht was fun, even if we didn't get too much out of it. The lake is a big draw in Zürich and having the festival arrayed around the lakeshore definitely helped elevate it over other similar festivals I've been to. We definitely had good luck with the weather, and I enjoyed getting my first proper glimpses of this city - though I probably spent more time looking at the crowds than the buildings. 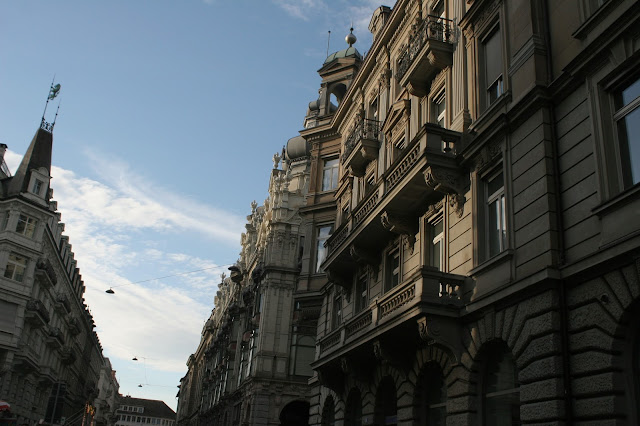 My second visit to Zürich could not have been more different. This visit was very impromptu, falling in the middle of my insane-in-a-good-way long weekend. The 2-day hiking trip planned by a friend and I had fallen through (weather), and we did a very long and pretty crazy improvised day-trip instead. So, I found myself late morning on Sunday wanting to do something with my day, but nothing too wild or intense and preferably not involving hiking or climbing. 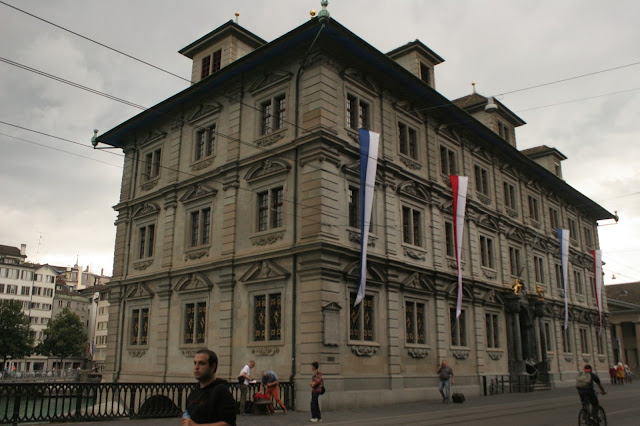 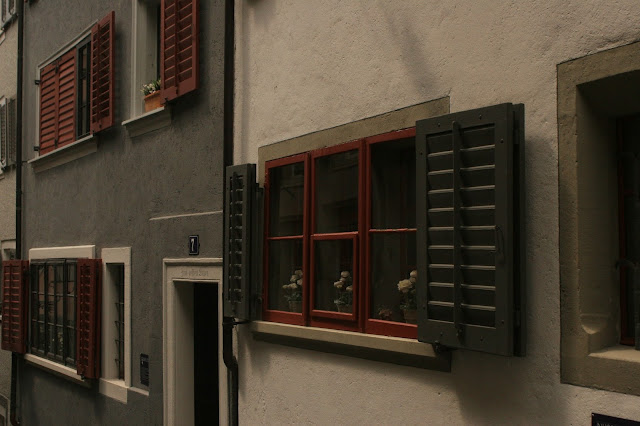 I met up with Sierra, who was in Switzerland on the same scholarship as I was and whom I'd met on the organized trip for the program (I'll have to write about that one separately at some point). We both wanted to photograph the old town, and as the weather wasn't great Sierra suggested we check out the national museum and go for traditional Swiss food for dinner. 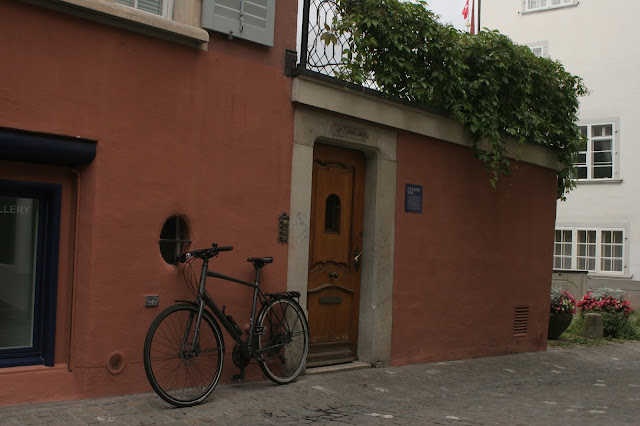 Since it was Sunday and raining off and on, the old town was almost completely empty, a nice change from my last visit. We spent a bit of time taking pictures while there was a break in the rain, and then went off to the museum. 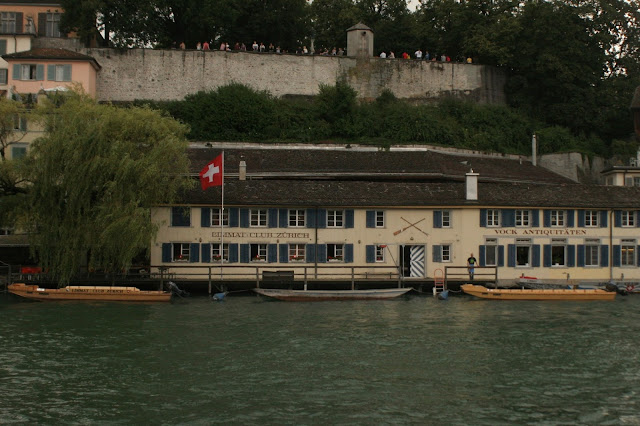 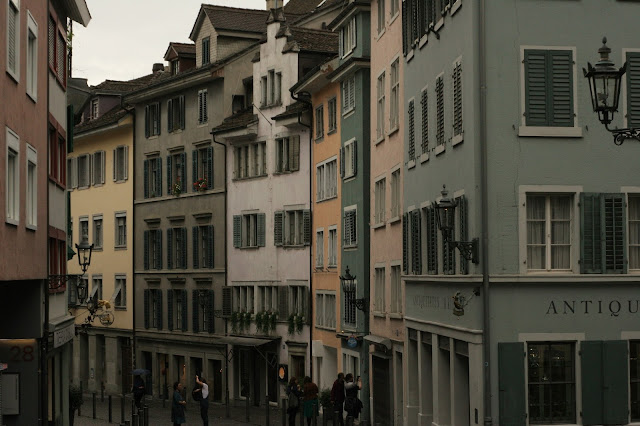 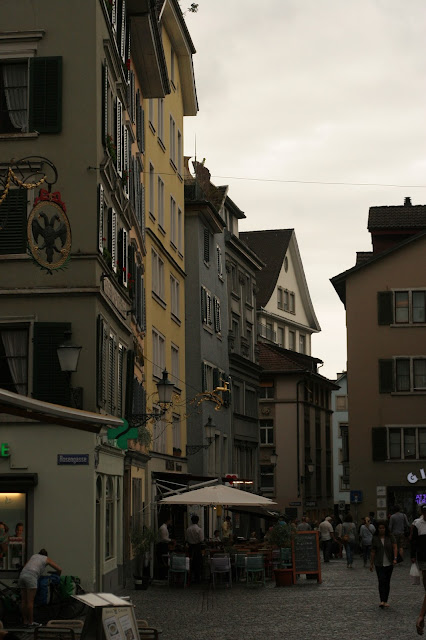 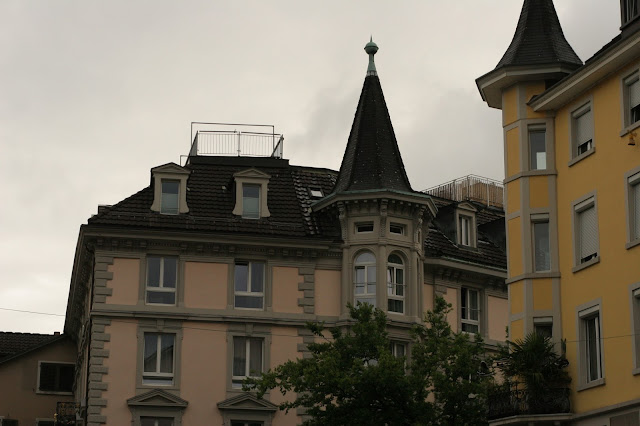 We even got a few minutes of sunshine! 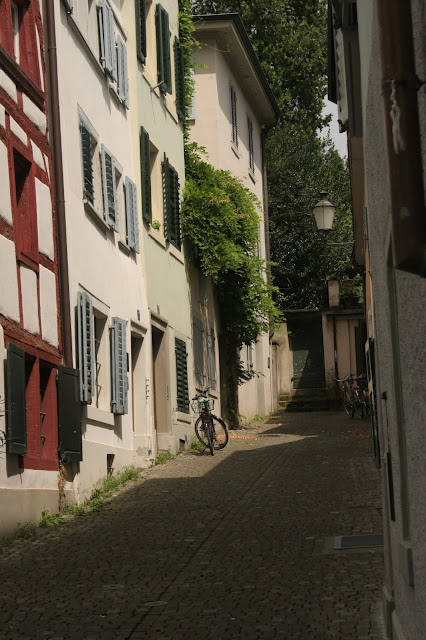 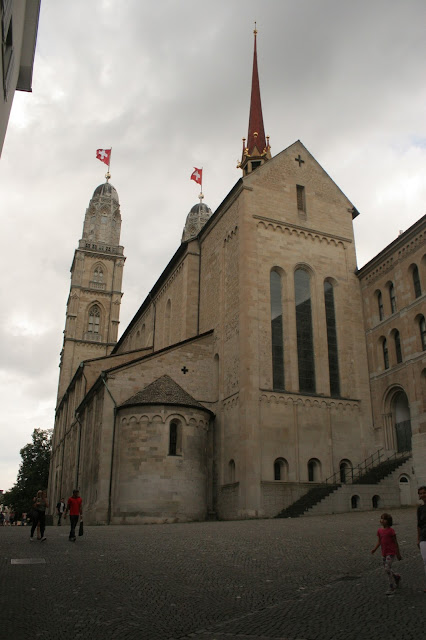 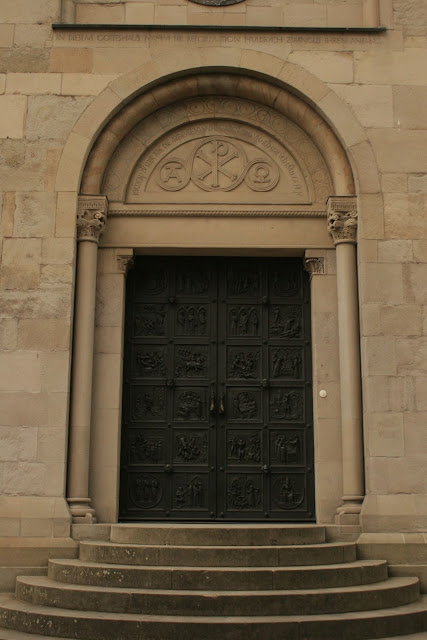 Unfortunately, the museum was gearing up for some kind of special event - likely related to the national holiday - and was closed to the public until just before our dinner reservation. After a bit of debate as to what we were going to do in the remaining time, I remembered seeing Kunsthaus (the city's art museum) while looking up "Top Things to do in Zürich", on Tripadvisor, something I did very briefly before meeting Sierra.
The museum is a typical non-specialized art museum, with a little bit of everything. The first exhibit, which appeared to be temporary, was by a Lebanese artist working primarily in photography, but with a number of different media. Much of his work on display (unsurprisingly) addressed the civil war, and the exhibit was quite interesting and powerful.

The museum has a pretty good collection of early modern art...but unfortunately neither one of us likes modern art very much! There are also some works by the French Impressionists and the mandatory selection of the old masters.
My personal highlight was seeing Marc Chagall's painting War. While I won't claim to know much about art, I've long liked Marc Chagall (well, his other works more than his flowers), and I tend to prefer art and music that is dark in theme and tone.

This painting is on a large canvas and hung across from a door leading into one of the rooms; walking into the room, I looked up, saw the painting, and...stopped. It has been some time since a piece of art has struck and moved me in the way that this painting did, and I was glad for the experience and the opportunity to see the painting. 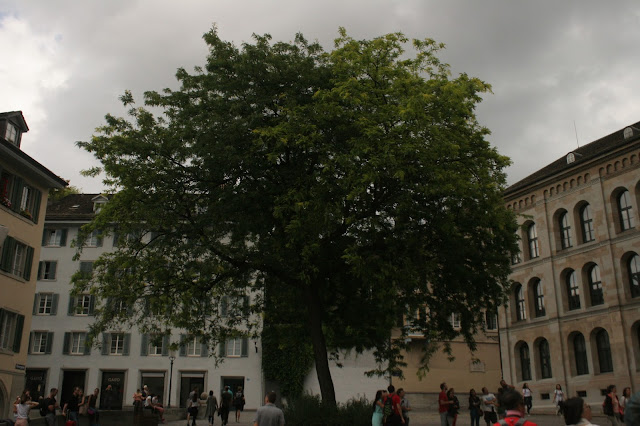 Aside from the two exceptions I've mentioned here, the museum didn't impress us very much. It was quite small for being the main art museum of a fairly large and important city. We went in with about two hours to go before our dinner reservation, slightly worried that we'd have enough time, and came out with around 45 minutes to spare - including the time we spent looking around the gift shop. (The gift shop is pretty great, by the way). In fairness, we skipped the special exhibit and only went into the main collection, but it still struck us as being a small museum and collection. 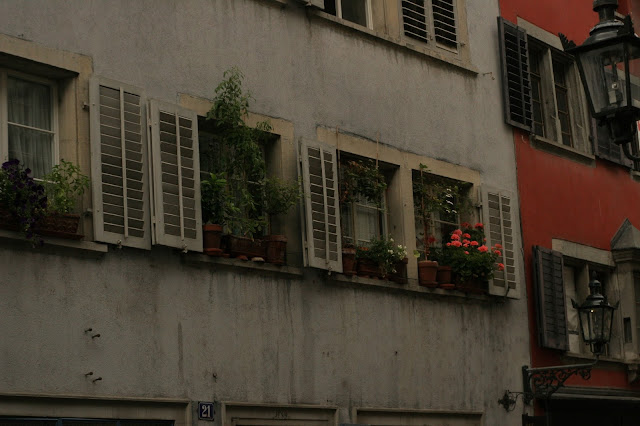 Dinner was, on Sierra's suggestion, at Raclette Stube (note: website in German only) in the old town. Bruna, another scholarship person, joined us for this as well. We ordered both fondue and raclette to share, since all three of us really wanted to try both.
The food was excellent. I'm a lover of cheese, as are the other two, and so a meal composed almost exclusively of cheese was heavenly for us. The cheeses were accompanied by small cooked potatoes, bread, and a variety of pickled foods (pickles, small onions, and corn). I've long wanted to try fondue, but the raclette was a wonderful surprise, and I think I liked it even more than the fondue!

After we were fully stuffed from the raclette and fondue, Sierra convinced Bruna and myself that we had to try meringues with cream. I was skeptical as I don't like meringues (too sweet, and too dry and crumbly), but I decided to try it. Now, meringues on their own aren't great, but add cream to them and it becomes a whole different ballgame. 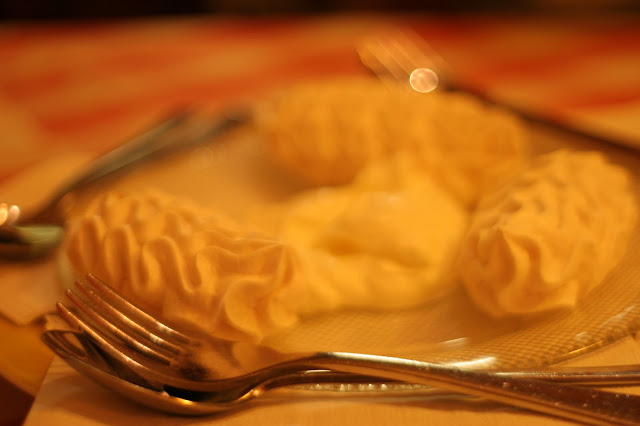 Mmmmm...excuse me while I drift off in heavenly taste memories...

The restaurant itself its great too, with low lighting and tables tucked into cosy corners. Our server didn't seem to feel too comfortable with English and appeared somewhat...bemused...to be helping three foreign girls figure out how to best order and eat both fondue and raclette, but was very patient and did an excellent job. She pretty well figured out custom orders for us as we wanted to split two different orders three ways, so thanks and kudos to her!

Still, I think the best part of the evening (ok, second-best...sorry guys, but cheese comes first in my heart) part of the evening was getting to spend it with Bruna and Sierra.
I really enjoyed getting to spend an evening talking with North Americans (and in my own age range!) again - it's sometimes nice to talk with people you know will understand you no matter how fast you speak and who share the same slang, expressions, and cultural references....and who are amused or baffled by the same things you are that Europeans would take for granted!

Even more than that, I loved finally having an evening of girl talks again. I live with mostly guys, so girl talks tend to be lacking in my life.

All in all, it was an enjoyable visit, and a wonderful evening in the midst of a wonderful long weekend.

The national museum is located across the street from the main train station and normally open 10 to 5, and open 10-7 on Thurdays. If you're there near the National Day (August 1st) be careful and double-check opening times. Their website is a bit confusing - more information on opening hours, including holidays, can be found here. Admission is 10 Fr normally and 8 Fr at reduced price.

Kunsthaus is normally open 10-6 on Friday to Sunday as well as Tuesday, and even longer (10-8) Wednesday and Thursday. Admission to the regular collection, which we looked at, is 15 Fr at full price and 10 Fr at reduced price (which includes students - our respective North American student cards were enough to get this price), and the special exhibit that we skipped would have been 22 Fr full and 17 Fr reduced (or 25 Fr full and 18 Fr reduced for both). The museum is in walking distance from the train station, but is a bit of a trek away. However, the walk there leads you through the old town, so it's enjoyable!

Note that both museums are closed Mondays.

Raclette Stube is open daily from 6pm. Their website, which I've already linked to, is only in German. They highly recommend reserving in advance; we reserved mid-afternoon on a Sunday and had no problem getting a table for 3 at the time we wanted. Like most Swiss, the staff speaks at least some English. The restaurant is vegetarian-friendly if you don't mind lots and lots of cheese.
Posted by Sophia at 12:57