A Day Trip to Rhine Falls

In my first post about Switzerland, I mentioned that a group of my housemates (the guesthouse people) took a half-day trip to the Rhine Falls. The falls themselves are said to be Europe's biggest waterfalls, and a popular tourist attraction. We were there in late June , and on a day when the weather was very changeable - alternating showers and hot sun - but it was still crowded. On a hot day in the height of the tourist season, I suspect the falls would be completely packed. 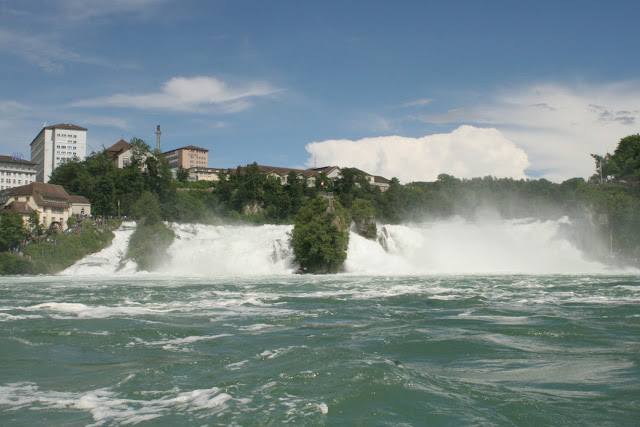 It was still one of the nicer days I'd experienced in Switzerland up until that point. My first two weeks in Switzerland consisted of near-constant rain and cloudiness, so alternating showers and sun were a definite improvement!

The constant rain did have another advantage: the Rhine was carrying unusually high levels of water, to the point where we heard high-water warnings on the radio while driving to the falls (this may have amused the German-speakers). We had the hope that high water levels would make for particularly beautiful falls; this turned out to be the case. 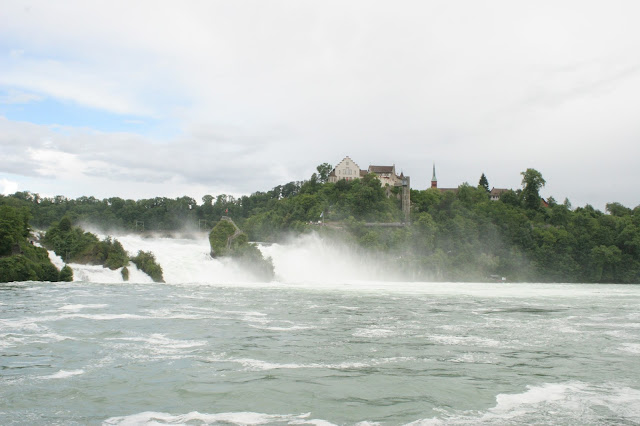 At first glance, the falls - though beautiful - aren't all that spectacular (okay, comparing them to Niagara Falls really isn't fair, but it is what my mind jumped to instantly). The photo at the top of the post is more-or-less what you see when you first come to the falls. What you need to do is to get close to the falls.

There are several options for getting close to the falls: you can take a boat tour, walk around the falls, or go to the viewpoints by the castle. We settled on the former two options (note that only walking around the falls is free; you have to pay for the castle viewpoints, and somewhat obviously for the boat tour. There is also a boat that will ferry you over to the castle, if you don't want to take the trek around). 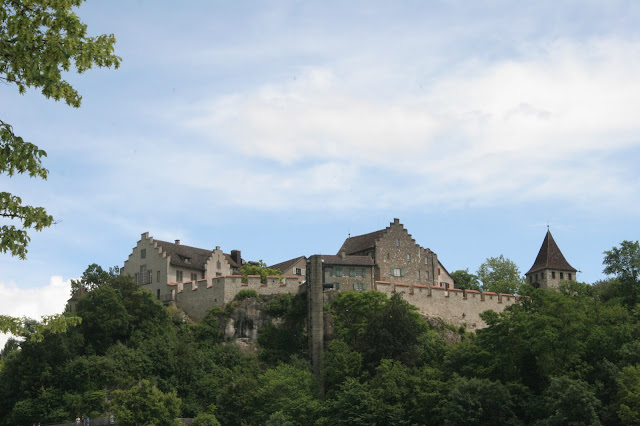 What we really wanted to do was take the boat tour to that little island in the middle of the falls. Unfortunately, we were told that the Rhine was running too high for the boats to land safely, so that tour was cancelled. We decided on the longer boat tour, which takes you a little ways downriver before heading back to the falls and taking you close to and past the falls twice.
The boat tour was a lot of fun. The Rhine becomes a lot calmer downstream of the falls and is quite pretty, and our driver had some interesting facts to share. He showed us roughly where the Germany-Swiss border was, which at times runs right down the middle of the river (I believe we crossed back and forth several times during the course of the tour). He also pointed out an old WWII-era bunker, placed near the border to provide warning of the German army and slow them down, should they have made it that far. 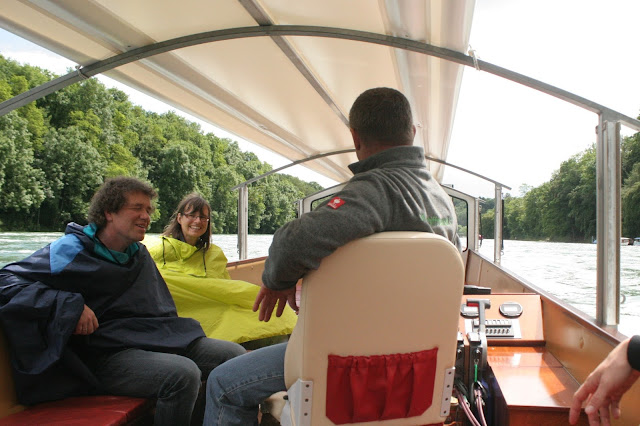 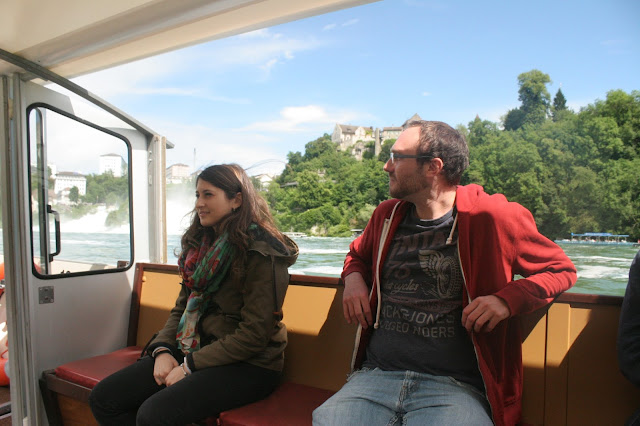 After going a little ways downstream, the boat turned around and brought us back to the falls. This was unsurprisingly the highlight of the tour. Our group piled into the front of the boat to have a better view. 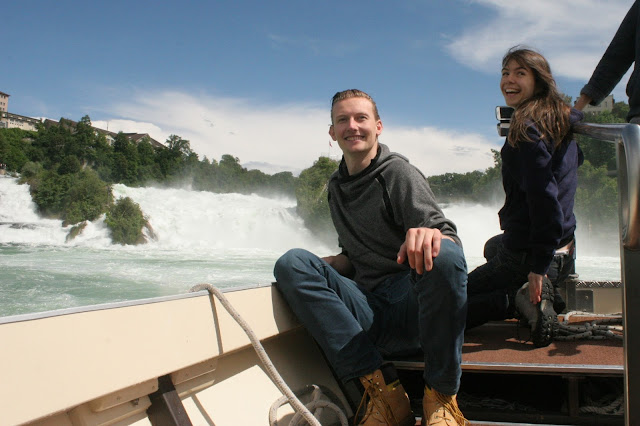 The perspective from the boat is a completely different one than what you get from land; not only do you see the falls from close by, but you also feel, and hear, the thundering of the water as it pours over the falls, the spray in your face, the tossing of the boat. 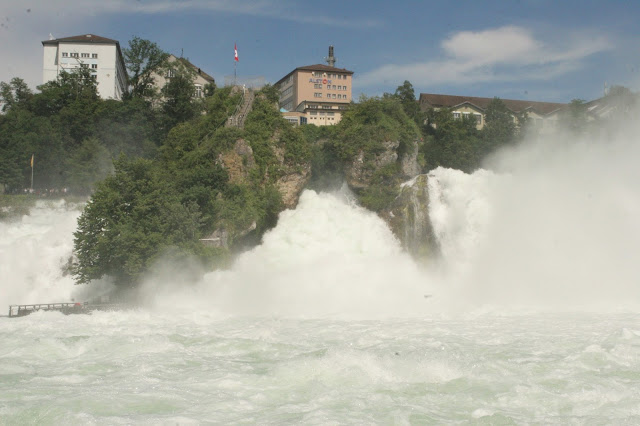 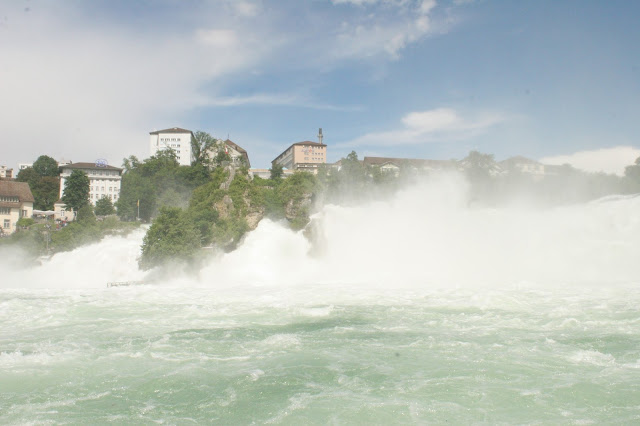 Once back on land, we set out on the walk around the falls. I think the walk was my favourite part of the day, mainly because of the changing perspective that walking around gives you, as well as lovely views over the castle. 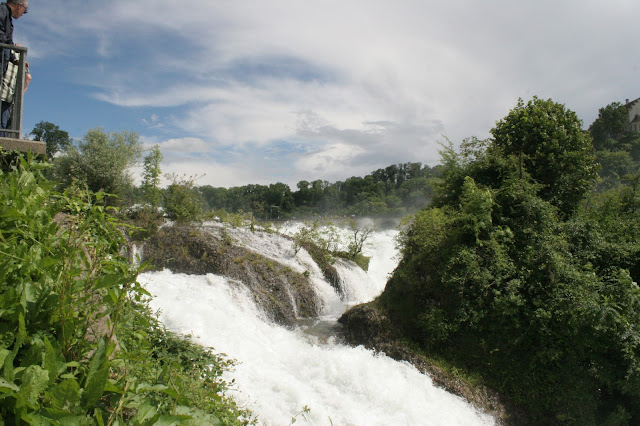 At times, the trail and its viewpoints take you very close to the falls, from the side, and you can not only hear the thunder of the falling water, but feel it. It's quite a remarkable thing to experience.

Going over the bridge was really cool - it's long over the broad, fast-moving river, and crosses just behind the falls 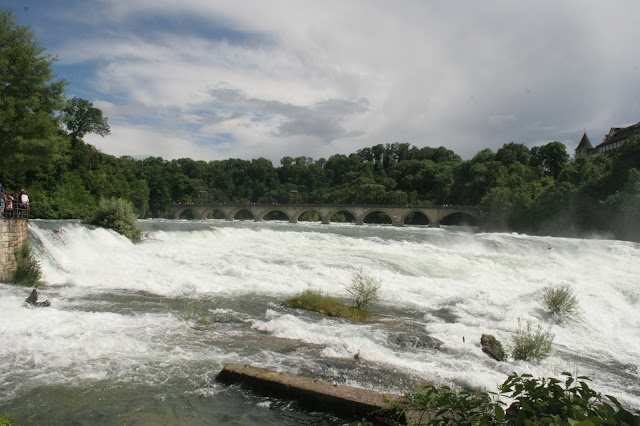 The walk ends at the castle, where we took a break for ice cream and/or beer before heading back. 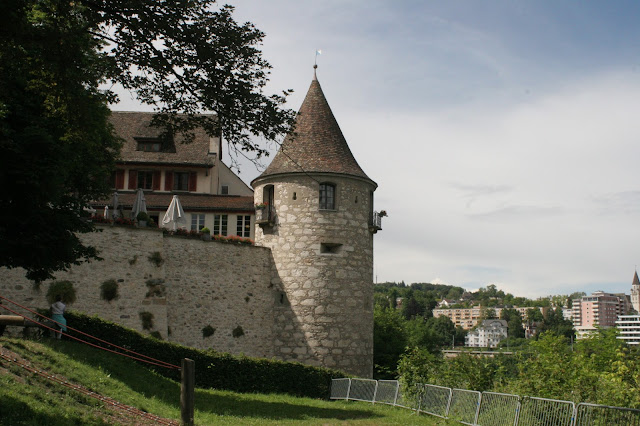 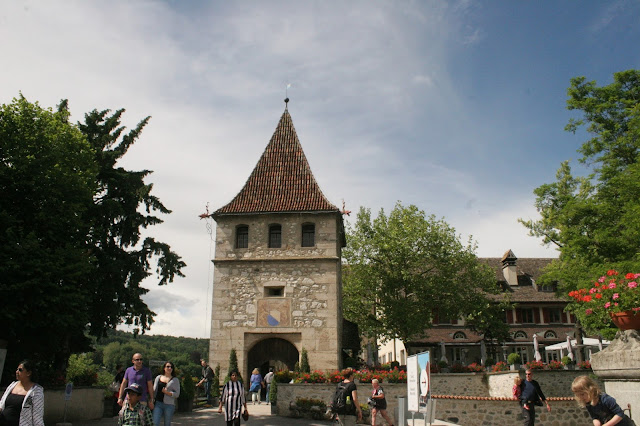 I'll leave you with one more shot of the mist coming off the falls. 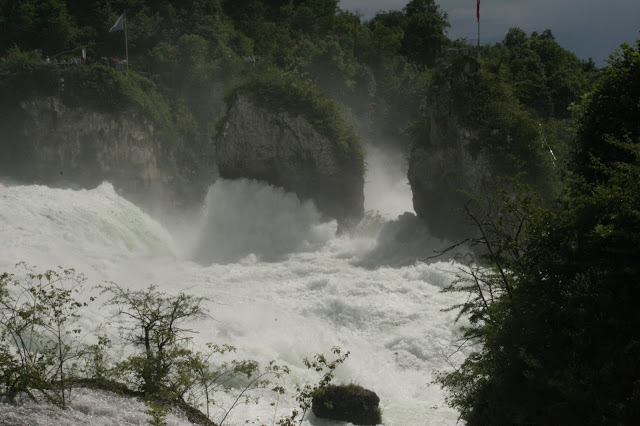